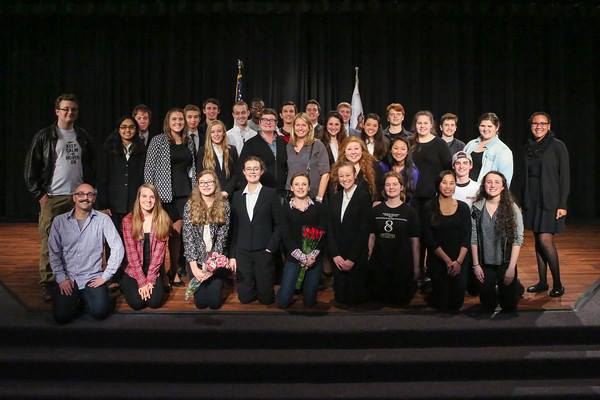 On January 10, in Alexandria, Virginia, West Potomac High School’s Beyond the Page Theatre Company performed a staged reading of “8,” the play.   The now married plaintiffs of the Perry v. Schwarzenegger court case and protagonists of the play 8, Kris Perry and Sandy Stier, attended the performance of the show along with their son Spencer, who was in the courtroom during his parents’ trial in 2010.

The final peroformane of 8 was followed by a performance of “Make Them Hear You” from Ragtime, by the Gay Men’s Chorus of Washington DC, whom also attended the play that night. Afterward came a talkback with the plaintiffs, their son and two members of the Gay Men’s Chorus, Marcus Brown and Chipper Dean.

The landmark case in battle for equal marriage rights, Perry v. Schwarzenegger, was filed May 2009, and resolved with a trial in January 2010. This lawsuit between two homosexual couples and California state officials resulted in the ruling that Proposition 8, which eliminated the rights for gays and lesbians to marry within the state of California, was unconstitutional.

The trial was adapted into a stage production entitled 8, by Dustin Lance Black in 2011. The content of the play heavily relies on the testimonies directly from the plaintiffs and defendants, showing viewers exactly what was said during the trial.

This past weekend, the play 8 was presented in a Fairfax County public school for the first time.

The talkback gave the audience an opportunity to ask the panel about their personal experiences in the fight for marriage equality.

“All the oppression and hatred directed at me as a teenager and later in my 20’s changed the way I saw my self, and reduced the amount of potential that I could have realized in my own life and that multiplied by millions of people is a reduction of goodness in this world,” said Kris Perry. “I remember hoping that my contribution through this case was going to prevent someone else from feeling the way I felt while growing up.”

The panel expressed their gratitude for the West Potomac High School community for bringing light to the controversial subject matter. Students, parents and faculty were thanked for making the production possible.

“I know there was some controversy over doing this reading and we are so impressed and proud that you brought your kids and your community together around this controversial topic,” said Kris Perry.

The cast, crew and production staff of the staged reading were also commended by the guest speakers for not only doing the show, but for the skill and talent in which it was executed.

“I’ve seen the show on Broadway and I’ve seen it in Los Angeles with a all-star cast, but I have never enjoyed it as much as I have watching it here,” said Spencer Perry.

During the talkback, the plaintiffs and members of the Gay Men’s Chorus also voiced opinions on what needed to be done to reach the goal of nationwide marriage equality. This past week, the Supreme Court agreed to determine the constitutionality of bans on gay marriage. The decision will be made in June.

“There’s a political tide turning that’s true more and more every day, and with 14 states left (with a ban on gay marriage,) I think the Supreme Court will have to take up the case. I think it will be a court case that brings the forces down,” said Spencer Perry.