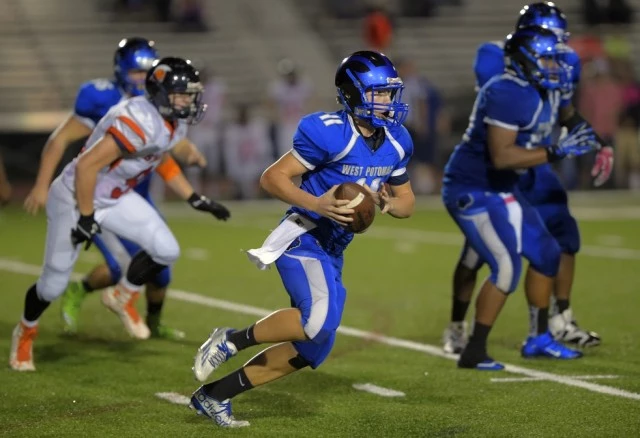 Last Friday, as dark storm clouds gathered above the field, the West Potomac varsity football team prepared to square off against the formidable West Springfield Spartans.

However, before their warm-ups were even finished, the heavens opened up, and the game was delayed for hours due to thunder and lightning. Fans, the band, and players from both teams were crammed into Springbank to wait out the storm. Unfortunately, many Wolverine fans chose to leave at this time, along with the band and the dance team. There would be no halftime show for this game.

Once the game was actually able to start, it became clear that West Springfield had no qualms with playing on a wet field. They recovered a fumble off of West Potomac’s first running play, and were able to convert the opportunity into a field goal, making the score a quick 3-0.

Despite the prowess of the West Springfield offense, the Wolverines were especially baffled by their defense. West Potomac was only able to put points on the board in the fourth quarter, after they forced West Springfield into a safety. But it was already too late by then, as the Spartans had already increased their lead to 28 by that point.

That’s when backup quarterback Tanner Jones was brought in. In what was only his second appearance this season, the sophomore QB rallied the offense, leading the Wolverines on a spectacular drive that ended with an excellent touchdown pass from Jones to wide receiver CJ Burch. Unfortunately, Burch did have to exit the game early due to concussion symptoms.

Although the Wolverine’s showing on Friday night was less than stellar, the weather for this week’s game against 4-2 Annandale is supposed to be much better, and since it’s the homecoming game, there’s sure to be a much larger crowd supporting our players. Annandale is a tough team, but we’ll skyrocket up to third place in the conference if we beat them. Go Wolverines!