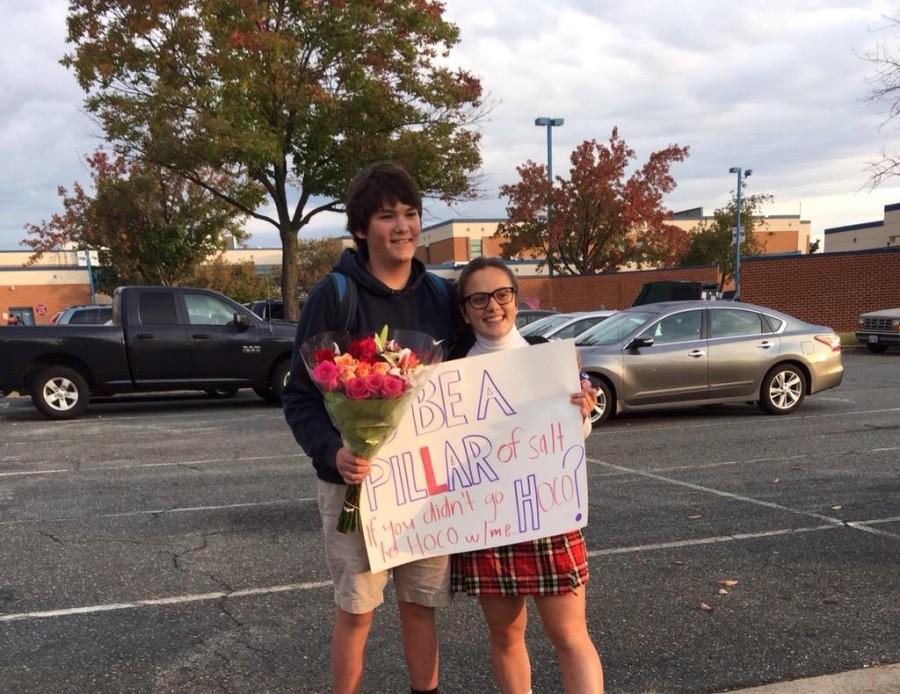 In the weeks leading up to Homecoming weekend, students at West Potomac High School propose to each other to be dates for the Homecoming dance. In recent years, the standards marking a good “Hoco Propo” have raised, forcing students to think creatively when asking each other.

As a result, elaborate public proposals have become increasingly common, and can be observed at school almost everyday in the month preceding the dance. These proposals usually involve a combination of flowers, clever pick-up lines, and colorful posters.

However, as charming as bouquets and clever posters seem, public proposals often burden the askee to react positively no matter what. These ungenuine responses are the main flaw of asking someone in a high-pressure situation.

“I said yes in person, but no afterwards,” freshman Meghan Angelini said about her proposal. “It was awkward. He threw a ball at me.”

For this reason, many people prefer being asked outside of school. Junior Will Nicholson asked Allie Puskar-Beckett to homecoming with the classic combination of flowers and a poster, but varied the proposal by asking at Scott’s Run, a nature preserve in McLean, Virginia.

“I liked the remote location…That way it was more personal and it was really sweet,” Puskar-Beckett said.

When students constantly see how others are asked at school and through social media, it appears that a fancy proposal is the only way to guarantee a date. But in actuality, the common view among many high schoolers is that the person matters more than the proposal.

“Even if he didn’t have anything I still would’ve said yes,” Puskar-Beckett added. “It doesn’t matter about the poster or flowers. As long as you truly want to go with that person, materials like that shouldn’t matter.”