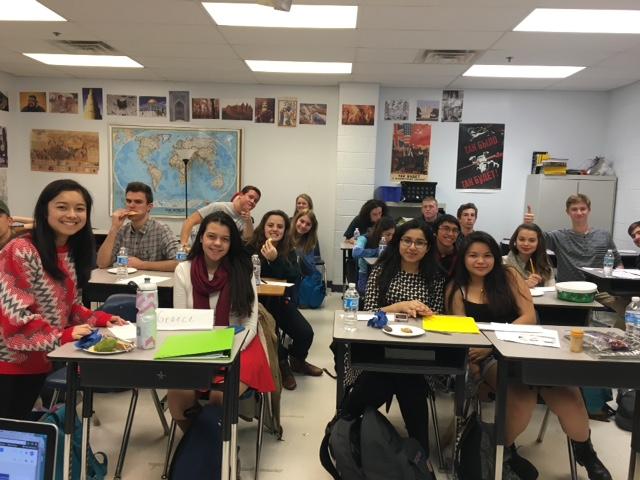 West Potomac’s Model United Nations Club held their third internal conference, WESTPOMUNC III, on Wednesday afternoon. The topic of the conference was the Syrian refugee crisis, a topic chosen by club members. Delegates were also met with a “crisis” halfway through the event. A civil war had broken out in South Africa and delegates needed to address the new situation along with the information they had prepared on the refugee crisis.

The conference, which had the biggest attendance of delegates at any WESTPOMUNC to date, nearly doubled in the amount of people compared to their first at-school conference, to senior Logan Petkosek’s surprise.

“WESTPOMUNC III was by far the largest internal event we’ve held,” she said.

As co-founder and co-secretary general, Petkosek added that this conference was the very first that she and her fellow secretary general, senior Olivia Ireland, had chaired. Their responsibilities included keeping delegates on task and on topic, in addition to enforcing parliamentary procedure, the rules which structure and govern debate during committee in MUN.

“Logan and Olivia did a great job chairing [WESTPOMUNC III] and having us follow all the procedures,” said senior Jason Vargas. “I really liked how organized this conference was!”

The Syrian refugee crisis topic was picked several weeks prior, and countries were assigned with plenty of time beforehand as well to allow for adequate research and planning on the delegates’ part.

“A lot of people expressed interest in a historic committee but the Syrian refugee crisis was the most popular committee topic,” said Petkosek. “I think that had a lot to do with its relations to the recent Paris attacks, which we discussed in a previous meeting.”

Petkosek and Ireland encouraged delegates to acquire as much knowledge as possible on their countries as well as information on the refugee crisis and their country’s relations to the crisis.

“I was Somalia and [Somalia] has hundreds of thousands of internally displaced persons as well as refugees living in camps in neighboring countries like Ethiopia,” explained senior Jake Hardison.

Conducting thorough research on your assigned country facilitates the debate process as well as deciding which countries to talk to during unmoderated caucus, periods in which delegates can converse with other delegates during an allotted amount of time, proposed by another delegate through a motion.

“I talked to the countries most concerned with refugees’ welfare, such as European nations and the U.S.,” Hardison added. “They were the ones most willing to give me money for upgrading my refugee camps.”

While some countries’ real-world relations to the refugee crisis may seem more integral than others, every delegate was able to come up with a way to respond to the situation for the overall benefit of the committee.

“I was Montenegro and even though it’s a very small country, there are refugees that sort of pass through it to get into Europe,” Vargas elaborated. “My country’s position was mostly to improve our infrastructure and improve the quality of our refugee camps.”

Delegates eventually began to form blocs, groups formed by geographical region or similar opinions, and collaborated to write working papers, ideas that could potentially be passed as the resolution for the committee. The committee for the Syrian refugee crisis was UNHCR, or the United Nations High Commissioner for Refugees, a UN agency created to protect the lives of refugees and solve these issues on a global scale.

“I talked to my neighboring countries such as Lebanon, Turkey, Iran, and Iraq because they are the ones taking in the most refugees, and have similar views on the crisis, for the most part, as Syria,” explained junior Pilar Jimenez, who represented Syria in the conference.

The conference allowed more experienced members along with newer ones to practice their research and public speaking skills before the club travels to conferences at Chantilly and Gar-field High Schools along with Georgetown University in the next few months.

“It’s a biannual event,” explained Petkosek. “We hold WESTPOMUNCs during slower times for real conferences. We like to use this as a fun, culminating event.”

Like many “real” conferences, WESTPOMUNC offered the opportunity to win best delegate, a title awarded to a stand-apart delegate who showcased how well prepared they were, how well they presented their information, and how much they contributed to their working paper writing. The title went to senior Gwendolyn Ghiloni for the work she put into representing her country, the United States, and providing an ample amount of research to facilitate the working paper and resolution process.

However, all participating delegates had a great time simulating the process behind the UNHCR committee and coming up with their own working papers in order to find a resolution to the crisis.

“My favorite part of the the conference was our resolution because it included some interesting points,” said Jimenez.

WESTPOMUNC III has shown how much West Potomac Model United Nations has grown in only a year’s time, and delegates are looking forward to the challenge in the upcoming conferences after being able to practice both regular and crisis committees in the comfort of their own school.

“I’m looking forward to participating in crisis committees,” added Hardison, who has participated in previous WESTPOMUNCs along with crisis committees at other schools’ conferences. “Your goal is more fluid as you represent a politician and you can create your own agenda instead of only following your nation’s ideas.”

As for the club, Petkosek hopes that the growth in membership means Model UN will continue at West Potomac even after she and her fellow seniors graduate after this year.
“I now see more underclassmen participation and know that they will be able to continue the club,” she added. “I’m really happy with how much the club has grown!”