Some students did not only cast their votes, but participated in political activism on their day off as well. 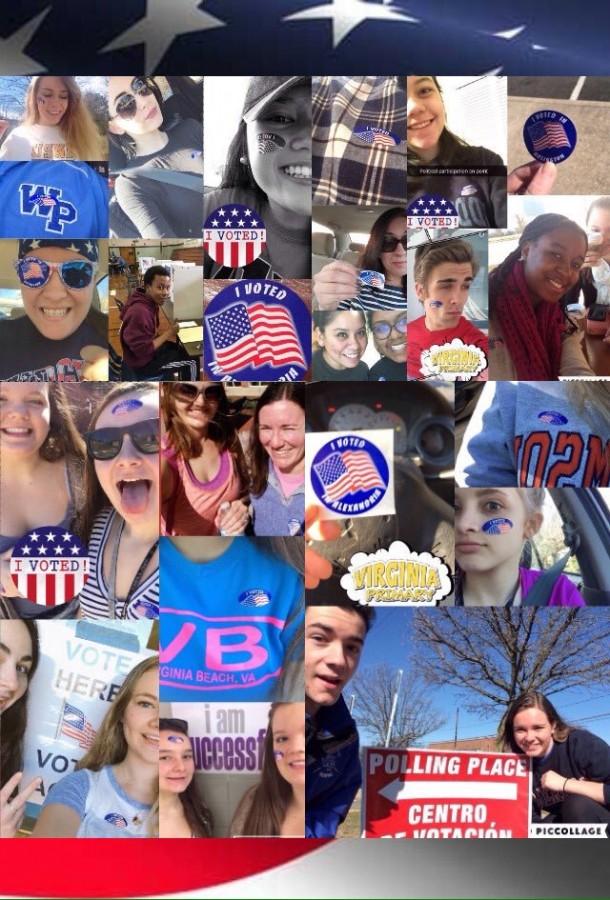 With encouragement from sunny, warm weather and a day off school, West Potomac students and teachers took to the polls on Tuesday Mar. 1, called Super Tuesday for the number of states participation. 12 including Virginia, voted in the presidential primary. With many of them being first time voters, eligible students did not only feel like they were obligated to fulfill a civic duty, but were very eager to do so as well.

“I decided to vote because civil liberties are very important to me and I want to make sure my views count,” said senior Owen Albrecht. Along with senior Alina Selnick, the two walked to their polling place, Bryant Alternative High School, to cast their votes for the presidential primary.

“Voting is super important, and the easiest way to be politically involved,” said Selnick.

Their eagerness to vote for the first time was matched by volunteers’ enthusiasm at their polling place.

“[Bryant] was really empty, but the volunteers were super excited to see some first time voters,” she added.

Like Albrecht and Selnick, many of the first time voters’ experiences were quick, convenient and enjoyable.

“[There were] friendly people explaining what to do,” said junior Jonathan Giron, who voted at Northern Virginia Community College’s Alexandria campus. “It was a relatively quick process [and I was] in and out in less than five [minutes].”

While students were enthusiastic to cast their first vote, many seniors enjoyed being politically active and doing more than just showing up at the polls.

Senior Max Wholleben is an officer in Young Republicans and he spent his Super Tuesday recruiting volunteers for the general election by handing out flyers with the Virginia Republican Creed and contact information with other members of the club. They also asked willing voters for their contact information so they could be notified when volunteer opportunities become available.

“The U.S. isn’t the world’s greatest nation by chance [alone], it’s because of all the men and women who have come before us. They laid down their lives so that we, their children, could live in a better world than they did,” he said.

For this reason, he explained, he and the Young Republicans chose to be politically active, so that they can “carry this torch, and make sure their sacrifices were not in vain, and so that we the people can continue to live in peace and freedom.”

“With the debate, we just wanted to highlight the differences in Hillary and Sanders so [students] could make a decision on who to vote for,” explained senior Emma Bass.  “But mostly we just wanted to make our classmates excited about voting in the primary which is definitely something that we don’t usually see in our age group.”

The enthusiasm and encouragement for young people to vote didn’t only come from extracurriculars, but in the classroom and on social media as well. Government teacher Nicole Borghard explained that one of the first things students learn in government is the importance of political participation, and students were not only encouraged to partake in the democratic process, but also had members of the office of elections come in to help all government students to register earlier in the year.

“We talk about how [voting] is an essential part of our democracy,” said Borghard. “Because if the people aren’t voting… then it isn’t actually a democracy. By passing up your opportunity to vote you’re giving up your voice and your power.”

But despite all the excitement both in the media and in everyday life that election season brings, young voter turnout is still open to some improvement. Senior Pablo O’Connell believes that the young vote is crucial in elections and that everyone that is eligible should get out and do it.

“The U.S. has one of the most abysmally low voter turnouts of any developed country, and the demographic that votes the least has historically been young people,” he explained. “If someone has the time to spend 6 hours binge-watching Friends, they should have the time to read about some candidates, get to a precinct and vote.”

As for those who believe their vote doesn’t count, Borghard, an experienced voter and staunch supporter of the act, offered some words of advice.

“There is a reason why politicians care more about issues for the elderly than issues for the youth—the elderly vote. The youth is often underrepresented and ignored by politicians because, historically, young people don’t go out and vote,” she said. “You can’t complain about the government if you aren’t willing to do anything about it. Voting is the most common, and arguably easiest, form of political participation.”

O’Connell hopes that more young people will soon realize that their vote matters as well.
“If could say one thing to all my peers, it would be this: You have the power to make your voice heard. Anyone who thinks that their vote doesn’t matter should consider that their vote is just as meaningful and counts for just as much as  anyone else’s,” he said.