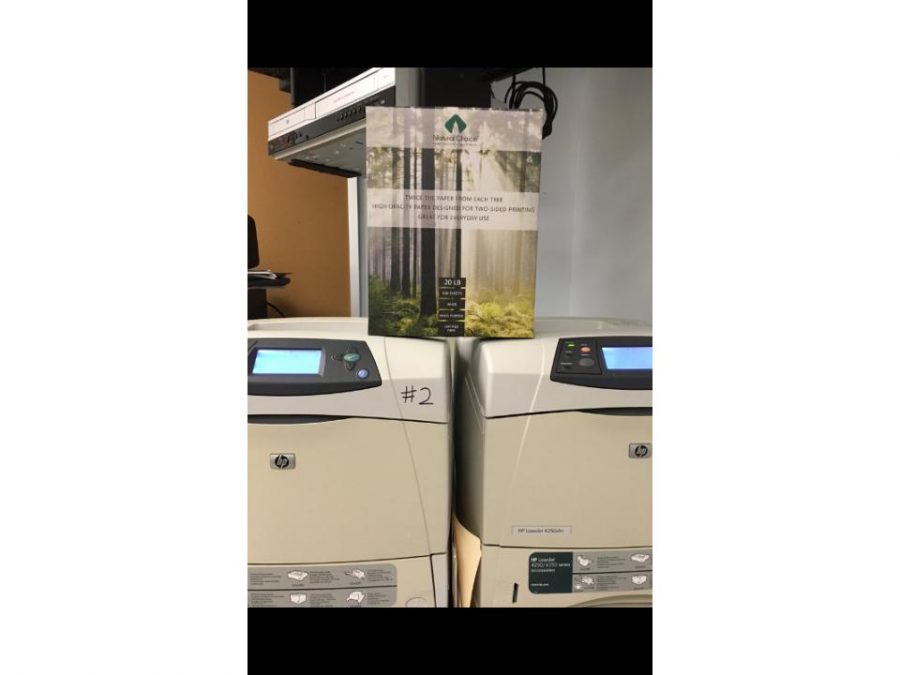 West Potomac High School recently switched to using recycled printer paper instead of the standard 8×11 paper. Despite the positive effects it has on our environment, the decision to start using recycled paper was not prompted by an explicit desire to help the environment — rather, it was an attached bonus to a package proposed by a local vendor to Fairfax County Public Schools.

“What really prompted [the change from regular paper to recycled paper] was an expiring contract but we [FCPS Office of Procurement Services] have been trying to leverage our volume purchasing power through the County and Schools for quite some time,” said Michelle Pratt, the CPPB at the FCPS Office of Procurement Services. “We issued an RNP–which is basically a way to get all of the businesses that sell [office supplies] to compete for the business and give us their best proposals, [Guernsey Office Products] offered a fair deal and we accepted. The recycled paper was an added bonus to their initial proposal,” she explained.

Although the new paper has brought about positive change to the environment, some people believe that there are some negative drawbacks.

“Although the paper is usable for the teachers–it’s not as durable as the original paper,” said math teacher Paul Laguna. “It tends to jam up at times when we use it in the copier copier.”

Fortunately, complaints about the paper jamming up were reported to the Office of Procurement Services and they took action immediately.

Our projected savings was 547,000 just by switching to this paper. So when we were evaluating the proposal from Guernsey [Office Products] we thought that we really did need to consider this because it was significant cost savings.

“We did start hearing from different schools that there was an increased amount of jamming and that multiple sheets were feeding at one time and so we took that information and documented it for about three or four weeks and then we held a meeting with our copier provider and the Guernsey Office supply company and the IT staff,” said Pratt. “It turned out that the paper was producing some additional dust because there isn’t as much water content in the way that its processed.”

Pratt then explained that there were some changes made in the way that the paper was cut. There were even several fans used to blow away the lingering dust so that it didn’t get stuck in the packages. The machines were then cleaned out and the new recycled paper was distributed to all the schools. Despite the County’s efforts though, the new version of recycled paper still isn’t perfect.

“When you put paper into the copier, you will want paper that does not get your copier stuck so of course you will want something that has less friction,” described Physics teacher Shari Terry.

“The less friction you have, the easier stuff flows and with more friction, stuff gets stuck. If you feel these [papers], the old [version of recycled] paper is much more light and therefore has less friction. Less friction, less jams. More friction, more jams.”

“Our projected savings was 547,000 just by switching to this paper. So when we were evaluating the proposal from Guernsey [Office Products], we thought that we really did need to consider this because it was significant cost savings,” explained Pratt.

Overall though, some students genuinely believe that the switch to recycled paper was one of the best decisions made by the County.

“It’s extremely beneficial to our environment,” said senior Neida Rivera. “You won’t notice the effects of recycling right away because it’s a slow process but I’m glad that the County took the first step towards a healthier environment for our community.”