What happens when two Cappie nominated high school theatre companies join together in a musical by recent graduates? 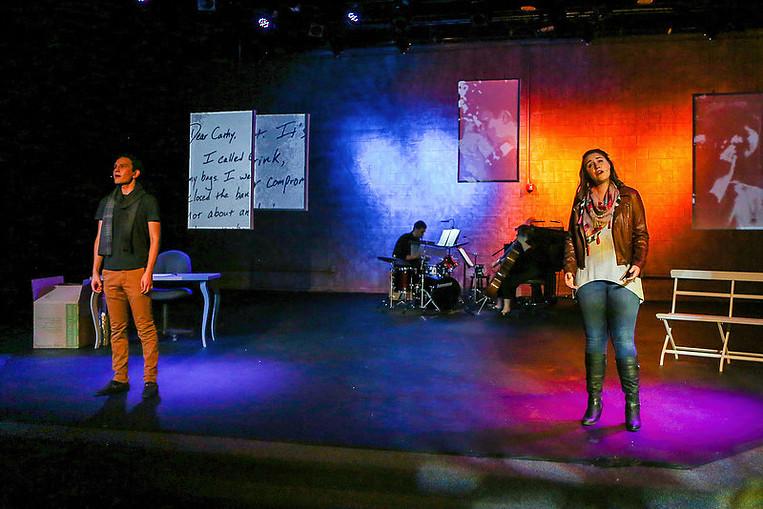 Jarzen and Hanton preform as Jamie and Cathy. (Image courtesy Beyond the Page Theatre Company)

Beyond the Page Theatre Company partnered with Robinson High School’s Rambunctious Theatre Company for the production of Jason Robert Brown’s The Last Five Years, which ran from July 15th through the 24th. The Last Five Years is a musical that follows the perspectives of Jamie, a rising writer (West Potomac graduate David Jarzen) and Cathy, a struggling actress (played by Robinson Class of 2016 graduate Madyson Hanton), and the ups and downs in their five year relationship.

The duo worked well together onstage and projected powerful emotions that made them seem like an actual couple instead of just actors. This continued through in scenes performed alone such as “The Schmuel Song” (which only featured Jarzen) and  “When You Come Home to Me” (featuring Hanton).

Hanton, armed with her powerful voice, sang her way through numbers such as “Still Hurting”, “A Summer in Ohio”, and “I Can Do Better Than That.” The play starts off with Cathy “still hurting” after finding out her marriage with Jamie is coming to an end, in which Hanton beautifully expresses the pain of her character’s lost through the songs. Though Cathy’s timeline, which is told in reverse order (beginning with the breakup of her marriage and ending after she first met Jamie) brought the risk in for confusion (and, at times, was), Hanton’s portrayal of emotions made scenes alone with Cathy extra special.

beginning to when he first met Cathy and ending when he decides to leave her. Jarzen talent particularly shined through in the reading of “The Schmuel Song”, in which Jamie and Cathy spend their first Christmas together and Jamie reads a seasonal story he wrote.

While it could’ve been said that the set for The Last Five Years was designed with simplicity in mind (decorated with white framed screens hanging), imagines were projected up onto the screens following what was going on in the story. Perhaps the most prominent props on the set were the table and box of personal items which Jamie unpacked at the beginning of the play and promptly packed away as the play grew to a close.