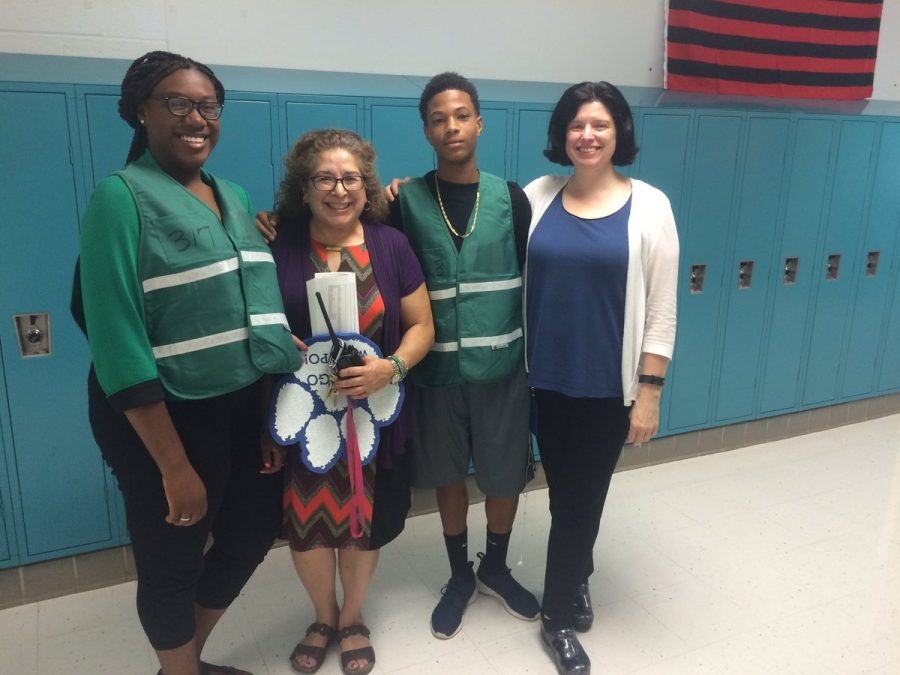 Following significant pushback from students and community members that prompted a change.org petition that received over 1000 signatures in less than 24 hours, this year’s new bathroom hall pass vest initiative has changed temporarily to allow students to hold the vest or obtain a paper pass from their teacher as opposed to exclusively wearing them.

The changes were made so the community can discuss the overall goals for the new initiative along with possible compromises. Principal Alex Case said that in the administration’s perspective, as well as his own, it wasn’t a change, but merely a different medium to accomplish the same goal.

In an announcement Friday morning, Case promised to model the school’s expectations by respecting student voice and taking time to discuss a plan that would continue to combat disruption in the hallway during class time, while prioritizing concerns of students as well.

Many of these concerns were summarized in the online petition created Thursday night by senior Katherine Amato, which ultimately prompted a response on Case’s part as early as the next school day.

Amato created the Change.org petition which garnered plenty of attention from current and former students – along with community members – and amassed hundreds of signatures in a matter of hours and totaled to 1,014 signatures in under 24 hours. Her main concerns, as summarized in the petition’s description, included hygiene—in which she describes the vest as “bacteria’s playground”—along with respect for students.

She thought creating an online petition would garner the most support for the cause compared to other mediums of communicating her concerns.

While she wasn’t expecting the petition to gain traction so quickly, she was incredibly appreciative of the support from current and former students as well as teachers and community members. With the support of nearly 1,000 signers, Amato met with Case early Friday morning to discuss concerns and steps forward.

Case not only publicly apologized for any “frustration and ill will,” that may have been caused by the bathroom vest policy, but is open to suggestions from students on the matter. However, he firmly disputed the notion that the vests were in violation of health guidelines.

“Mr. Case was very excited to hear what I had to say. He’s very open to [hearing] what students want in their school environment,” Amato said. “I’m happy to have him as my principal, honestly. I realize that other principals might not be as open and allow students to incorporate their ideas in this environment.”

The bathroom vests are one component of a new attendance initiative known as Wolverine START on Time (WSoT) after last year’s attendance rates raised concerns among staff, administrators and the community as a whole.

WSoT is comprised of several components, all of which have been introduced to students in this first week of school. These include “positive sweeps”, a switch from plastic board hall passes to colored vests and the issuance of student identification badges that students must have.

The identification policy will go into effect starting this week, September 12.

For security purposes, any adult who works at or visits West Potomac is required to wear photo identification. Administration decided it would add an additional layer of security for all students to wear an ID badge as well.

In previous years, students would receive IDs when they got their pictures taken from Lifetouch on picture day. However, the new IDs were provided by several different county offices, coming at no extra cost to the school.

Students don’t have to wear the IDs around their necks, as long as they’re visible on their person. Picture retakes will be available, the date is yet to be announced.

As the IDs are still new, there are no solid consequences for not wearing one. However, the administration would like to see students with their IDs. The administration hopes to see the student body embrace the ID requirement to help improve security for West Potomac as a whole.

Additionally, a new 20-20 bathroom rule has been added as part of WSoT. Students will not be able to leave class for the first and last 20 minutes. This differs from last year’s rule of 10-10, which administration felt wasn’t properly enforced, thus exacerbating the tardiness problem. However, Case expressed that if student attendance and timeliness continues to improve the way it did in the first week, the school may switch back to 10-10.

Administration received criticism for the “attendance surges” that were done sporadically throughout the 2015-16 school year. Faculty and students were dissatisfied with the way the system worked, and how the walk to their subschool would only increase missed instructional time. This lead to the creation and implementation of the “positive sweeps.” These sweeps would take place before the start of every class, with their intention being to change West Potomac’s culture to one that avoids tardies.

Case has stated there are two benefits to the positive sweeps. No one wants the hassle of having to go to a check in table and be escorted to class. Also, students won’t want to “hang out” in the hallway if there are teachers on patrol.

Penalties for failing to attend class before the bell rings will be implemented starting this week as well. If students are late to class three times, it will result in a 45 minute detention, and six times with a 90 minute detention. Tardies will be wiped at the start of every quarter.

Case acknowledged students’ sentiments in regards to the initiatives and the effects they had on the community, but expressed his belief that they contribute to “a fair [and] equitable changing culture.”