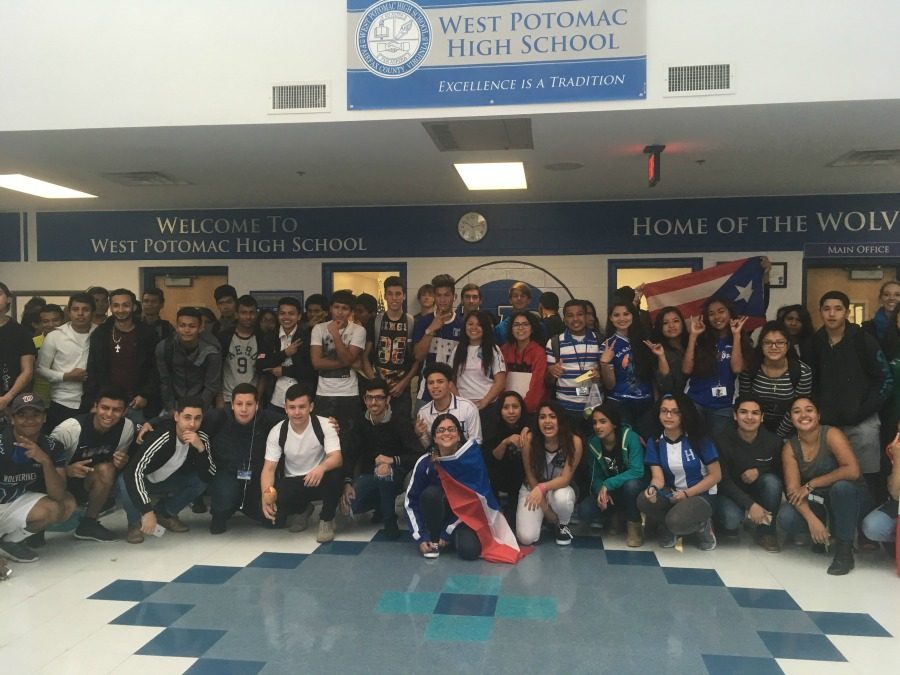 Filling the halls of Quander with loud music and good energy, the Hispanic Leadership Club (HLC) hosted one of multiple parades on Friday in honor of Hispanic Heritage Month that will continue this week. To many of the participants, the Hispanic Heritage Parade meant a new step in recognizing West Potomac’s Hispanic population and showcasing their culture and tradition with the whole school.

“This community is together for many reasons, one of them is the love of their cultures,” said HLC president Angie Muguruza. “When we do these events at school, somehow we remember our countries, when we used to live there. It is an honor for everybody to show their cultures.”

At the start of Wolverine Time on Friday, dozens of participants gathered in Spanish teacher Yamalie Colon’s upstairs Quander room for a last minute prep before making their way around the building. Music blared from a portable speaker and students sang songs and clapped as they walked down the halls, with plenty of observers from nearby classrooms. When they reached the front of the school, the party began and plenty of dancing ensued.

The Hispanic population at West Potomac comes from many countries, the majority being from El Salvador. However, students also come from many other countries including Honduras, Mexico, Argentina, Bolivia, Nicaragua, Puerto Rico, Peru, Colombia, Panama and Guatemala.  In between performances from students, the crowd celebrated their country pride with a chant. “¡Se ve, se siente, [country name] esta presente!” they shouted, which means, “We see it, we feel it [country name is present].”

“[The chant means] we are all [here] to celebrate,” said Colon. “My theme for this Hispanic Heritage Month and for my Spanish for Fluent Speakers classes is that we have unity in a language and we need to come together to celebrate each other’s cultures.”

Through much preparation and planning in the week prior, Muguruza was able to pull off an event that brought Hispanic culture to the forefront, especially during the month of their heritage.

“[HLC] had a meeting last year, and we planned a lot of things for the Hispanic Heritage Month, because this is the first time that the school is actually celebrating,” she said. “That was one of the reasons when we created the club, we wanted to have a voice and have the Hispanic community together.”

The parade was her idea, as she wanted to replicate how parades are done in the students’ countries, usually in the streets with instruments. However, she insisted they didn’t need any more materials besides their own spirit. She not only coordinated the parade but all of the dancing as well, which she found to be beautifully done by her peers.

“We chose a parade, because in Hispanic countries it is really common to celebrate by doing that, it is really fun and you actually can share happiness and love with your people,” said Muguruza. “Like I said, in our countries they do it in the street, I think it is kind of original the idea of doing it in the hallways because, students will be watching from the doors of their classrooms and maybe joining us, also because these Hispanic Parades is to make a lot noise and make people feel comfortable about of joining us for our celebration.”

Both Spanish teachers and students alike felt that the most important aspect of the parade was having the voice of their culture resonate with the rest of the school community. Through events like these and many more that the HLC and HLC Dance Team plan, their ultimate goal is to immerse the school in their culture, considering it is so pertinent to the community that surrounds us.

“The Hispanic population is the fastest growing population in United States. Our language is the second most spoken language in the world. Spanish comes before English, can you believe that? I want my students and this school to know that we are here and that we bring much more than what some stereotypes portraits us to be,” said Colon. “We are intelligent, bring lots of flavor, we have accomplished so much, and we have so much to offer. This school needs to see that we are not trouble makers, but people that want to support our theme for the school which is to be the World’s Greatest High School. To become that we have to, not only accept each other, but support each other.”