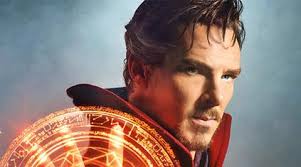 Dr. Strange, released on the Fourth, is a Marvel movie – the only reason I went to see it was because of that red Logo luring me in. It’s not too good, frankly, but I wouldn’t say it’s bad either. It was a disappointment for me, personally, especially compared to many of my favorite Marvel movies (Warning before further review: I am a die-hard fan of the Marvel Cinematic Universe.)

Dr. Strange is strongest when it’s flashiest, and is visually superb in both design and flair. It does not, however, excel in any ways that would make the movie more interesting to me. The characters are neither deep nor interesting, and barely any of them undergo an ‘arc’ over the course of the movie. The plot is boring and forgettable, and I would place it as easily one of the worst Marvel movies in regards to cool events or action. The highlights of the movie for me were Tilda Swinton’s acting as The Ancient One and the first fight scene choreography.

Benedict Cumberbatch plays the titular Dr. Strange (who comes off as a less likable or funny Tony Stark), a man who’s lost his ability to practice medicine after an accident, but pursues the art of spellcasting to make up for it. The Ancient One (think Obi-wan Kenobi as a bald woman) teaches him magic, and he is helped along by love interest Christine Palmer (a fellow doctor who doesn’t do much of anything important) and some even more minor side characters. He fights against an age-old destroyer entity known as Dormammu.

I’d recommend this movie easily, though only under the following conditions:

1) You are a die-hard Marvel fan like myself. You will watch anything from the MCU. Be prepared to be disappointed, especially by Stan Lee’s cameo and the way infinity stones are shoehorned into the plot.

2)You are a die-hard Benedict Cumberbatch fan, in which case you will most likely enjoy his character just as much as any other he’s played, regardless of movie quality – or lack thereof.

3)You like good visuals, be they special effects, design, or showy CGI. If you fall into this category, you’ll probably be watching in IMAX 3D, and I’ve got to say you’ll be getting a lot. Sure, the visuals don’t really MEAN anything, and one or two scenes look Spy Kids 3 levels of goofy, but for the most part it looks stunning.

Whether or not you plan to watch Dr. Strange, and whether or not you plan on enjoying it, I wish you the best of luck. Even though I didn’t enjoy it very much personally, it sparked a lovely war between me and a few friends over Marvel Movie quality and their filmmaking strategy over the past few years; in short, while the movie is all flash and no substance, at least it gives you something to talk about.