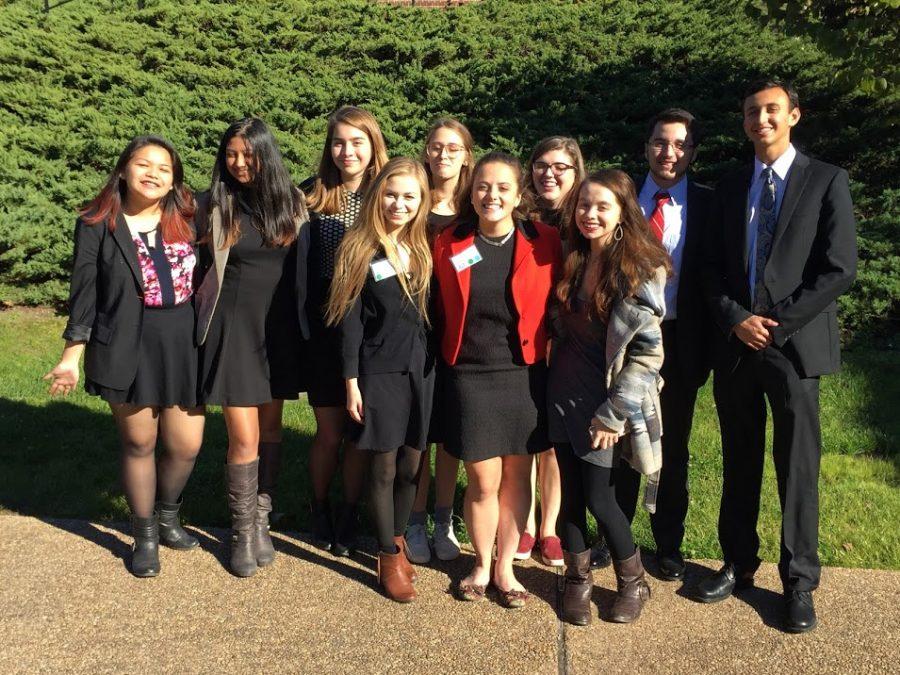 MUN members at WMHSMUN, which was held at the College of William and Mary.

On November 11th, the Model United Nations (MUN) team made their way towards Williamsburg to attend William and Mary High School Model United Nations conference (known as WMHSMUN). The conference, which lasted from the 11th to the 13th, gathered together high schools from all over the East Coast to discuss economics, women’s rights, the fall of North Korea, and almost anything in between.

“[At MUN conferences], you get a country and you represent that country on the certain issue that your committee is discussing,” explained Model UN president, senior Pilar Jimenez explained. At WMHSMUN, she was in Organisation for Economic Co-operation and Development (OECD).  “Prior to the conference You research your country’s stance on said topic. Once you’re actually in committee you try to come up with a solution for the problem at hand, all while trying to demonstrate diplomacy and cooperation.”

Jimenez expressed that WMHSMUN was a positive experience. However, she explained it took a lot of planning for MUN to get to Williamsburg.

“There was a lot of asking for extensions, tying to get chaperones, trying to get this approved by the school, permission slip forms, and many other aspects,” Jimenez said.”Organizing things takes a long time because everything you do must get approved by five [different] people…Before [arriving] I was apprehensive because [our MUN team] had never done a conference like this before but after I saw that all of our members were having a good time, I eased up. It was a truly great experience.”

“At WMHSMUN I was in a crisis committee called “the fall of the DPRK.” I really loved it. Since it was a hypothetical situation it was really interesting to see how everyone interpreted their assigned position in the different situations that were thrown at us,” Flowers said.

Flowers explained that one of her favorite parts about MUN conferences was meeting new people, and encouraged students to participate in MUN for those reasons.

“My favorite part of every conference is meeting new people. I think that’s the really unique part of MUN, you get to meet all these nice and really smart people from all over that you would otherwise never know,” she said. “[Also] the conference offered a lot of opportunities for the delegates to have fun. We went to a dance that WMHSMUN hosted and it was a lot of fun. Other times we would go out and get lunch around campus, which was beautiful…If anyone is interested in joining MUN we meet every Wednesday in trailer 18 and you can join at any point in the year. It’s a really fun club and you learn a lot.”