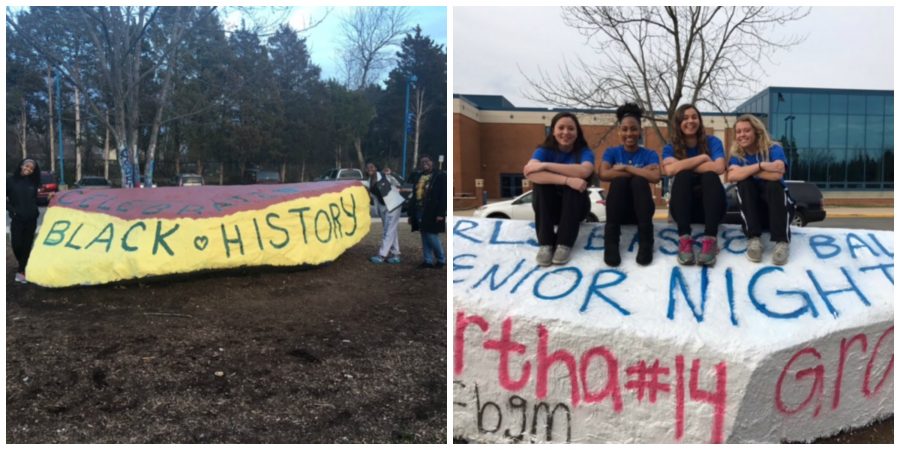 February is Black History Month, and the Black Student Union painted the rock in front of the school on January 31 as part of their celebration and demonstration of pride to the rest of the school.

Members painted the Black History Month message in order for students to enjoy the decorated rock when they returned to school the following day. The following Sunday, the rock was painted by the girls’ varsity basketball team to celebrate their senior night.

“The system in place for painting of the rock is first come, first serve,” clubs and organizations coordinator, Melinda Hedenberg said. “Groups are free to paint the rock with the understanding that just as they are painting over someone else’s message, their message will also be painted over.”

Nonetheless, BSU President, Raelyn Davis, was surprised that it was only a few days before their message was covered.

“It was crazy because we thought it would be up there for a long time. The rock had been painted blue from the election [in November] to late January and we painted over it and [five] days later our paint was gone,” she said. “We were a little frustrated, but it’s OK. We were just shocked it got painted over so quickly.”

The first come, first serve system was put in place several years ago when the use of a schedule became a “nightmare” according to Hedenberg.

“It caused fights and unnecessary arguments over what should be a source of price for our school.”

Junior basketball player, Natalie Terwilliger, who organized the efforts to paint the rock for their team’s senior night, was remorseful about the miscommunication.

“I thought that it had been up for a while, but it hadn’t and I feel so horrible that we painted it quickly. If I had known, I would have talked to Helmick or someone to paint over it,” she said.

Terwilliger and Davis both said that their respective groups have experienced similar situations in the past.

“I think there should be more communication on who gets the rock and the amount of time,” Terwilliger said.

The BSU’s sponsor, Shari Dyan Terry, paid between $45 and $65 herself to buy the paint. The BSU will re-paint the rock this week, and are gathering donations from members to purchase more materials to do so.

“BSU doesn’t have anything against the girls’ senior night because everybody knows that people want to paint the rock for senior night,” Davis said.“That’s their tradition so we were perfectly fine with that because seniors wait for that all four years.”