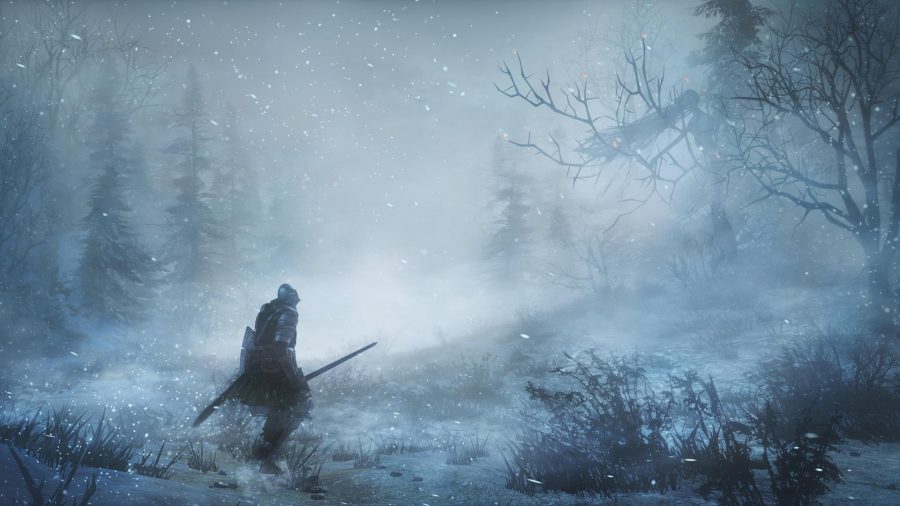 Ashes of Ariandel is the first downloadable content expansion for Dark Souls 3. It features 16 new weapons and shields, five new sets of armor, four new spells, a new ring and two new bosses, all wrapped within the new location, the Painted World of Ariandel. This painted world has suffered under the cycle of “rot,” which taints the painted world through it’s canvas. The player accesses the world by visiting the Cleansing Church bonfire and talking to a kneeling NPC later found out to be “Slave Knight Gael,” uncle of young painter found within the Painted World of Ariandel.

The DLC, although short, is extremely fun. In the normal Souls series fashion, you’re gonna die… a lot, but that’s part of the fun. The sense of trial and error, learning what works and what doesn’t work as you advance through the world is great, and this DLC does a great job with that despite the short length of it. The lore is fascinating, and I found myself reading all of the item descriptions to uncover the mystery of this painted world. Who is Ariandel? What are these millwood knights? Why is their a giant wolf attacking me before each checkpoint? These questions are really what made the base game of Dark Souls 3 so fun for me, so I’m glad they continued the mysterious atmosphere with the DLC.

The boss fights were easily my favorite part of the DLC. The lore behind each fight was shrouded with mystery, and more information was uncovered as you got closer to beating the bosses (which were not at all easy). The optional boss is the aforementioned wolf that you have to fight two or three times before the final battle which begins with you fighting the Champion’s Gravetender and then midway through fighting him, the Gravetender Greatwolf comes bounding in to fight for the final time.

The main boss of the DLC, Sister Freide, is much more memorable than the optional boss. It begins with you walking down into a chamber, where you find a hulking feathered monstrosity chained down to a chair with its head bowed in a bowl. You later find out this beast is Ariandel, who painted this rotting world. As you walk towards him, Ariandel asks for his flail, which you find out he uses to draw blood from himself to be used as paint for painting his world. As you reach towards Ariandel, Sister Freide, a scythe wielding woman, comes behind you, and the encounter begins.

The first stage of the battle has you fighting Sister Freide, who uses her scythe and frost spells, along with turning invisible at increments. After defeating her, a cutscene begins where her blood flows towards the bowl Ariandel has his head bowed in. As the blood reaches the base of the bowl, Ariandel lifts his head and begins to scream and break free from his bonds and uses Estus to revive Sister Freide. Thus begins the second stage of the fight, where you fight a rampaging Ariandel and and Freide. You’re forced to dodge Ariandel as he stampedes around the room, and stay on the lookout for Sister Freide, as she vanishes from sight. This dynamic and chaotic aspect makes this fight one of my favorites in the entire game.

After taking out Sister Freide for the second time, and Ariandel, Sister Freide bursts up, covered in blackflames and becomes Blackflame Freide. This final stage changes her moveset and makes the player relearn all of her timings and rhythm. After beating her, you’re able to use her soul to buy either a her scythe or the flail which Ariandel used to shred his own skin.

This DLC gave me exactly what I loved from the base game, and left me thoroughly satisfied, but also thirsting for more. But more is coming, as the second DLC, the Ringed City, comes out March 28 for PS4, Xbox One and PC.