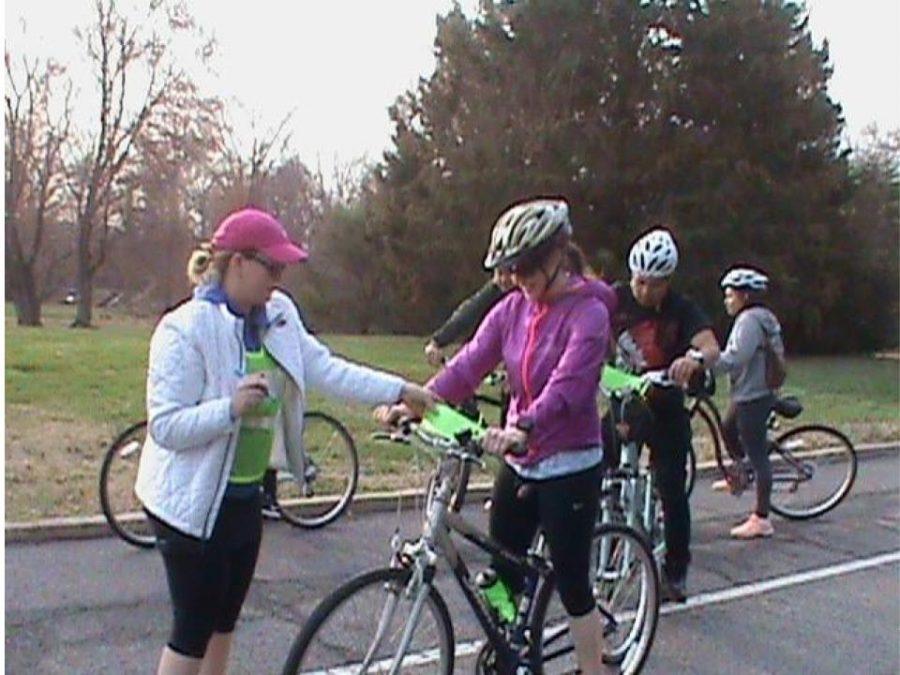 Bikers line up to compete in the Bike-a-Thon.

Many community members of all ages gathered in Fort Hunt Park on a Saturday morning to support the West Potomac Wolverine Green in the Bike-a-Thon. The money that was raised in the Bike-A-Thon went directly to the funding for the shrubbery of the Wolverine Green.

Breakfast and drinks were provided for the riders. There were around 12 spare bikes for those who didn’t have a bicycle, but still wanted to ride. There was a volunteer bike mechanic from a nearby bicycle shop offering to pump air into tires, patch the tires, and so on. Despite being so early in the morning, the atmosphere was very lively with music playing in the background.

Sue Conway Bernstein, in charge of West Potomac’s community outreach, suggested the idea of a Bike-A-Thon after a similar fundraiser called the Erg-A-Thon had inspired her.

“All these people were going into cafeteria and I am wondering what they were doing. I walk in and there are 60 rowing machines. The entire Crew team, adults, and youngsters are all rowing simultaneously. And the whole point is I am gonna row for 15 min, and then you are gonna row for 15 minutes. I got sponsors and you got sponsors, and they raised 18 thousand dollar in one day,” she said.

“I’ve been doing fundraising for almost 20 years as far as school stuff goes, and you always try to come up with something new and different way to earn money.”

That is where the idea of a Bike-A-Thon had originated from. However, the purpose of this event was much greater than to simply to raise money, but it was to spread the love of cycling. Mrs. Bernstein teamed up with Ben Folsom, the father of two twin boys, both who attend West Potomac.

“This guy walks up to put his lunch on the table and he’s got a bike hat. I recognize this guy and I go, ‘You ride a bike?’ It turns out he is going to be the guy to help us do this with another woman, Cindy Andersen. And these guys are avid bicyclists,” Bernstein said.

“Ben’s bigger ambition is to start a bike club. He wants to hold clinics, he wants to teach a kid how to take care of his bike, how to put on a chain, pump up the tires, how to patch them. He want them to see the world by the bicycle. He has a bigger vision and a bigger hope that this event will inspire other people to ride bikes. That’s his bigger goal and I want to help him fulfill that.”

Riding a bicycle is a great way to get kids outside and to move around. Karen Colbott Sanders, a school board member of Mount Vernon High School, expresses how exercise is also a large factor in school education.

“In education, we need to address the whole child, the whole student. That means our brain, our hearts, and our physical bodies. Certainly a biking event address the whole body, and is a great way, when you’re out on the bikes, to clear your head and think about other things,” she said.

Cycling is inexpensive and extremely accessible. In Alexandria, there are roads that are ideal for riding, there is the Mount Vernon Trail, and parks like Fort Hunt Park. Ben Folsom believes that cycling will not only benefit the individual, but also influence the community.

“More kids on bikes, means drivers would expect to see more kids on bikes. Study after study, mainly in European countries and bigger American cities, have shown that the more people are on bikes, the safer everybody is on the road,” he said. “The principles we are trying to base this on, are safety, etiquette, conversation, and commerce.”

As Bernstein stated, “In the long run, what we spend to build this will be insignificant to how it will be used.”