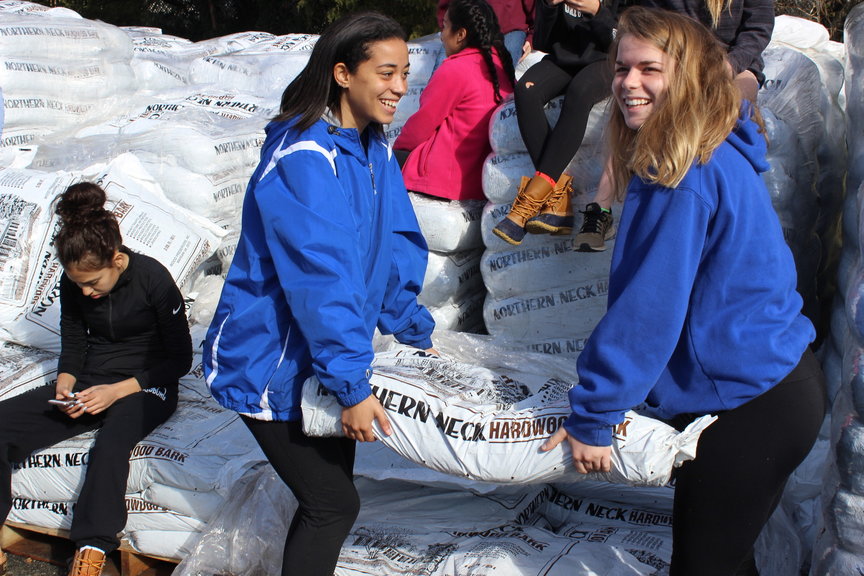 Over 6,000 bags of mulch were delivered by West Potomac student and parent volunteers to homes for free last Saturday as a part of the Wolverine Athletics Booster Club’s annual mulch sale. The student athletes and volunteers sell mulch to raise money for the school’s sports programs. They sold out of their mulch supply in late February.

The Wolverine Athletics Booster Club is a volunteer organization made up of parents who dedicate their time and effort to promote the success of West Potomac’s athletic programs. These individuals maintain the sports fields, help sell concessions at games, host team dinners, assist at fundraisers and much more.

Student athletes were involved with the delivery process by attending at different scheduled shifts in order to help with the delivery process. Volunteer parents and student athletes worked during the morning hours and enjoyed donuts and coffee for breakfast. The day was filled with cars coming in and out of the overflow parking lot and dropping off bags of mulch throughout the surrounding neighborhoods. Other students stay behind to help load bags into trunks.

Senior Vera Abankwa, a member of West Potomac’s varsity dance team, has attended the mulch sale since she was a freshman.

“The mulch is pretty heavy, but as you keep lifting it gets easier,” Abankwa said. “And it’s fun to see all the other sports teams there.”

This year, WABC member Mike Monson served as the director of the mulch sale. According to him, more than 6,000 bags of mulch were delivered this Saturday.

Preparation for the mulch sale has taken place over the last six months, in which time was spent finding trucks and volunteers who could drive the students around for delivery.

Over $10,000 is raised annually by the sale to pay for sports equipment, uniforms and supplies. They have conducted several similar fundraisers this year as well, including a Christmas tree and wreath sale and selling discount cards. The money raised from these events contributes to projects like the school’s turf field and new practice fields.

“WABC has been selling mulch for over 10 years and this year we sold the most ever,” Monson said. “We are very thankful for the strong support we get from the local community.”