One Student’s Thought of Another

It wasn’t too long ago that Sophomore Emily Stewart received a mysterious letter that describes another person’s thoughts of her. The letter was written by an anonymous writer and delivered to Emily through the Guitar Group’s Candygram.  She was delighted by this sweet action towards her. 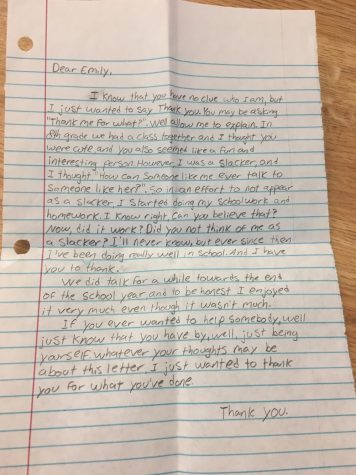 “Well it wasn’t a love note or anything. It was just some person that was talking about how they wanted to thank me. They said that in eighth grade we had a class together and they liked me and thought I was interesting. They were a slacker and they wanted to be able to talk to me, so they got better at their grades and stuff. They just wanted to say thank you because it had a lasting impact” said Emily about the contents of the mysterious letter.

If someone was to receive this kind of letter, how would they react? Some might be creeped out by this sort of confession. Others might be flattered by such a sweet remark, while the rest might simply just not think anything of it.

“I was very happy and really flattered. It made me feel really good, but it also kind of made me want to be a better person. If I did this, then I could maybe help other people.”

Due to the little information provided by the writer of the letter, their identity is still unknown to Emily. She also doesn’t have any suspicions about who the writer might be. However, because of what’s included in the letter, she would some day like to meet the writer to express her thoughts.

“I’d probably say thank you, even though that’s kind of weird because they were thanking me. I would be kind of interested to know how they are doing now.”

She has decided to keep it because to her it’s more than just a letter.

“Well I guess it’s kind of a story about the person. It’s interesting to read about where they were to where they are. It’s significant because it talks about something good that I did to help someone and I want to be able to remember that. I keep it so I can look back whenever I don’t think I’m doing well in life. It’s something to give me hope.”
We may not realize it but what we do can have an impact on those that surround us. Many times we don’t realize how we have affected others’ lives because the things we do go unsaid. “ It’s kind of ironic because I apparently impacted their life, but they also impacted mine by telling me I helped them, which in hence keeps the cycle going.”