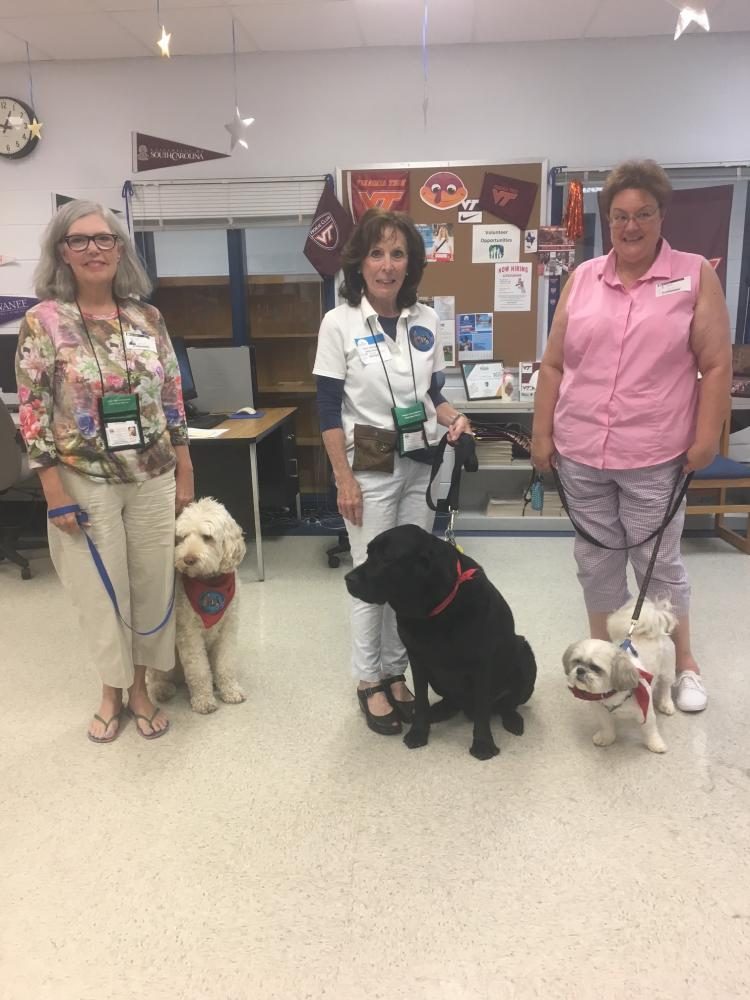 Are you obsessed with anything to do with dogs? Or just desperate for a stress-reliever during finals? During lunches, you can go down to the College Career Center and sit down with a fluffy friend. These therapy dogs are from Therapy Dogs International and are here to reduce the stress levels among West Potomac students. This year, the therapy dogs visited on April 7th and 21st, May 5th and 19th, and June 9th.

Mr. Morrisey, the Assistant Director of Student Activities and Academic Support teacher for the West Potomac Academy, was given the task to organize the therapy dogs’ visits throughout testing season.

“I actually didn’t come up with the idea, it came out of the Project Aware Committee,” Morrisey said. “Basically, other schools have done it and Mr. McMan, director of student services,  and some of our clinical staff like the school psychologist and social workers, thought it would be a good idea and I said that I’ll go ahead and take care of it.”

All different types and breeds of dogs are put into training to be a part of the Therapy Dog International program. After a couple months of training, the dog will be put through a very strict test that, if passed, will qualify them to be an official therapy dog.

Pat Valle, owner of the therapy dog Major, shared what some qualities a dog must have to pass the exam.

“To be a therapy dog, they have to be very well behaved, they have to enjoy interacting with people, be very social, have to also actually like to be petted, most importantly they have to be calm and be able to understand the command,” Valle said.

Therapeutic dogs aren’t only just to help students and teachers relieve their academic stress– you will actually find most dogs in hospitals, libraries, and nursery homes.

“The dogs go to a lot of different events, but it’s basically to bring comfort and joy to people who love dogs,” Valle said.

Dandy and his owner Lynn Smith have been a part of Therapy Dogs International for about 3 and a half years. Dandy has received many achievements like a Puppy Manners Certificate, AKC Canine Good Citizen Certificate, and his therapy dog license.

“My best memory was when we went to an elementary school and he had two little boys reading to him,” Smith said. “The two boys would have to take turns reading, so one boy was reading to Dandy and the other one was talking, not paying any attention to the story. Dandy reached over with his paw and put his hand on the little boy to be quiet.”

Everyone has a reason to put their dog into a program like Therapy Dogs International whether it was an event that happened or you just want to help other people.

“I had a couple with a little boy who had an autism spectrum disorder who would watch my dog when I went out of town. Out of nowhere, that little boy starting reading to my dog in bed at night. I found out that where I took him to daycare was having therapy dog training and I thought maybe this was something he was made to do,” Debbie Tucker, owner of Lacey, said.

Morrisey also mentioned that during the 2017-2018 school year, starting in September, they will have therapy dogs come in every Thursday during lunches because of the result of this year’s visits.

“I would definitely think that this is a positive outcome,” Morrisey said. “Everyone that comes in to see them just loves having the dogs there, even if it’s just for a couple of minutes here or there. It’s been nothing but positive–I actually wish more students would come to see them.”