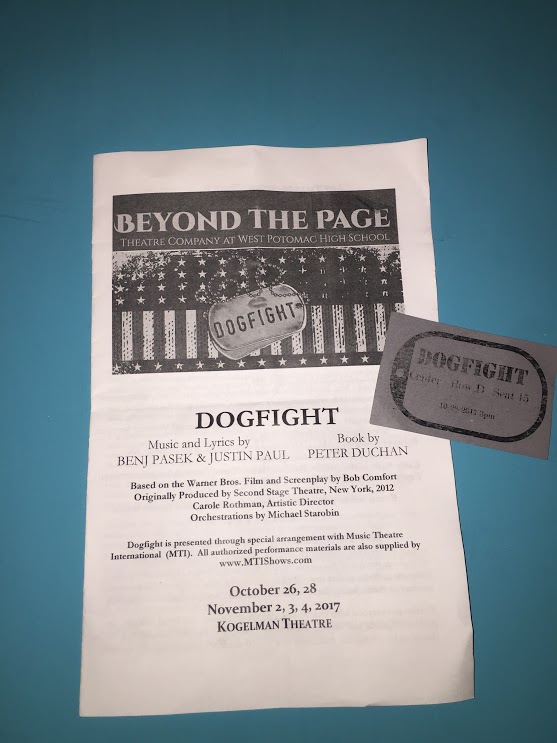 I’m not a musical lover–the only musical i’ve ever seen is Annie–so I was surprised when I enjoyed the West Potomac Theatre Department’s performance of Dogfight as much as I did. Right after I watched Dogfight, all I wanted to do was watch it again. This musical is definitely worth watching.

Dogfight is based on the Warner Bros. Film and Screenplay by Bob Comfort.The musical tells the story of Eddie Birdlace, a U.S. Marine during the Vietnam War. While in San Francisco, on the eve of his deployment, Eddie and other Marines take part of the “Dogfight” tradition. The dogfight tradition is basically a way that men humiliated women and got something out of it.

Eddie invites Rose Fenny, a compassionate young woman, to a party. Eddie then tries to get Rose out of going to the party, but she insists. After finding out about the dogfight and what it really is, Rose confronts Eddie and the others and walks away. This leads to Eddie apologizing and taking Rose on a date. Before Eddie left, Rose gave him her address so that he could contact her. In a heartbreaking twist, Eddie tears up the address and doesn’t stay in contact with her at all. When Eddie comes back, he is filled with grief from losing his close friends and fellow soldiers. In his return back to San Francisco he is met with hate and disgust from those who detest the war. Having no place to go, he hopes to reconnect with Rose, and in the end he does so.

Seeing the way that people actually treated the soldiers after they came back made me cry. This musical is filled with so much emotion that you can almost feel as if you were there. The cast did such an outstanding job at portraying the characters. You can tell by what a fantastic job they did that they threw themselves into their roles and really captured the meaning of the story. The orchestra did a wonderful job with the music, and the production crew did an incredible job at pulling the whole show together and just bringing the audience into it. I can’t possibly imagine all the time and effort all the crew put into this musical. All in all, Dogfight really touched on topics not mentioned on a everyday basis. The actors were able to really capture and portray these topics that people try to ignore. They’ve shined a light onto these things so that people can finally understand that problems can’t be ignored.