Team loses first scrimmage to Hayfield, but shows great promise for the season to come 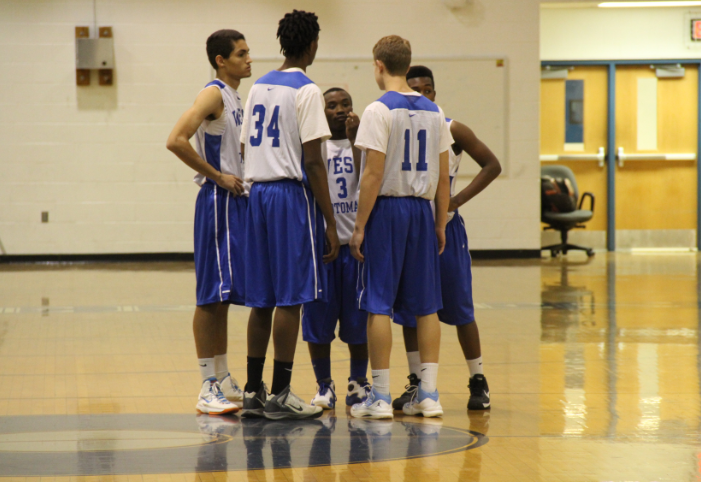 On Nov. 22nd, the West Potomac basketball team made their first return to the court since their disappointing first-round 69-53 playoff loss to South County last February. None of the five starters on that 2012-2013 squad returned this year, and the composition of the team is now dramatically different. The new guard scrimmaged Hayfield, a team they will not meet in the regular season, displaying some rust in an overall loss.

Asked about what he saw in his team during the scrimmage, Coach David Houston III noted, “A lot of hustle, I thought we hustled. It’s early in the year, we’ve been playing about a week and a half, so we knew we had a lot to work on, and it’s a good thing to see us out there playing against an aggressive team, so we can figure out what we need to work on.”

Wolverine stalwart Brandon Pressley has graduated, but has left behind his experienced understudy in point guard Austin Treakle. Like Pressley, Treakle is a short, quick player. After years of playing and learning under Pressley, Treakle demonstrated veteran poise, along with his ability to use his quickness and court vision to create his own shot and find his teammates for uncontested buckets. Playing on a team of scorers, he fits in nicely as point guard with his skills as a facilitator.

Alongside the senior point guard is his younger brother, freshman Alan Treakle, who is starting at shooting guard. The younger Treakle also showed off his speed, and had a productive night slashing to the basket, making the physical plays of a veteran forward driving to the hole. The combination of the two Treakle brothers in the backcourt proved to be a lethal offensive asset. Both players not only possess the unique ability to make defenders look silly with quick, explosive moves, but also the ball movement skills necessary to find the open man. “I haven’t had brothers in the backcourt ever at the same time since I’ve been at West Potomac,” said Coach Houston, “They play well together, they both know each other’s strengths. I can tell Austin was looking for his brother a lot. Alan is more of a scorer and a penetrator. I thought they both played real well. Alan, being a freshman, in his first action against a solid team in Hayfield that was really physical and fast, I thought he did real well.”

The open man Houston wants his two guards to find is senior sharpshooter Joseph Richards. Playing a three-guard position that is a hybrid between shooting guard and small forward in the West Potomac offense, Richards is regularly wide open in the corner to knock down longballs. On Richards, Houston said “We really like it when he’s in his corner, hitting threes. He’s been working on creating his shot, but we have some other guys that can create some shots.” It was abundantly clear that Richards three-point shooting will be heavily leaned on, and will be a staple in the team’s offense.

Perhaps the most intriguing member of the presumed starting five is senior power forward Conrad Jenne. Jenne has played the majority of his basketball career at a guard position, but this season finds himself in the front court. Given his height and power, combined with his athleticism and scoring ability, this appears to be a brilliant move, and should make Jenne a matchup nightmare. “Because he’s a guard playing a forward position, at least tonight he was, so we figure [in] our matchups with other teams, a big’s probably gonna be guarding him, we want to take advantage offensively of that. Plus he’s a good athlete, I mean he runs real well, and he jumps real well, so we think he can probably handle himself there.”

Rounding out the five is senior Lennon Young at center. Young, at 6’5”, is more lanky than the standard center. However, his athleticism and long wingspan make him a force on the boards, and he has noticeable talent in tracking rebounds. He also excelled with short range shots and putbacks versus Hayfield. If Lennon can provide a big-man presence on defense, and give his high-powered offense second chance shots, the Wolverines should be a force to be reckoned with in the Northern Region.

Next up for the team is a scrimmage at Langley on Nov. 30th. This will be their final tune-up heading into the regular season, which will start at home on Dec. 3rd, when the Wolverines will host the Westfield Bulldogs. This will be the first time since 2008 that West Potomac will not open its season against Mount Vernon.