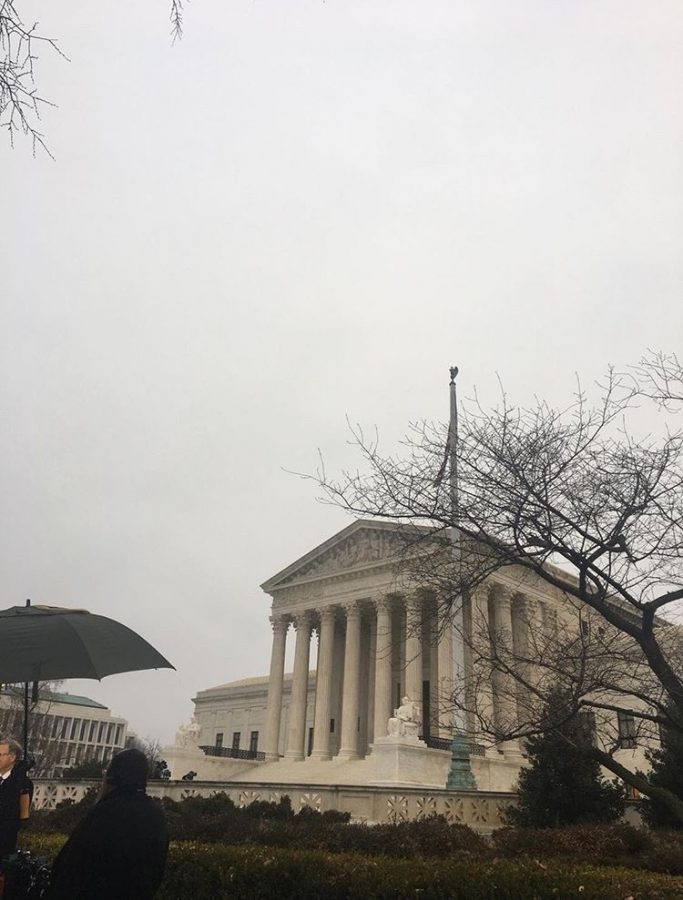 Photo of the Supreme Court building taken by Julia Cunningham

For most students, Supreme Court rulings only happen in textbooks; however, for West Potomac seniors Julia and Katherine Cunningham, the highest court in the land was just in reach. The sisters witnessed a monumental case last month when they sat in on the Supreme Court ruling of Masterpiece Cakeshop v. Colorado Civil Rights Commission.

The case centers around a gay couple, Charlie Craig and David Mullins, who were refused service by a privately-owned cakeshop in Lakewood, Colorado. The owner of the shop, Jack Phillips, refused to create a wedding cake for the same sex wedding in July 2012, noting that the request went against his Christian beliefs. He considers the cakes as artistic expression, protected by his freedom of speech and exempt from the the state’s anti-discrimination laws.

Craig and Mullins filed a discrimination complaint with the state, which prohibits discriminatory practices on the basis of sexual orientation. The incident resulted in a legal battle which, with aid from the Colorado Civil Rights Commission, was brought to a Colorado court of appeals. Although the Commission (in support of Craig and Mullins) won the case in lower court, Philip’s business appealed, and the case was ultimately selected to heard by the Supreme Court.

This controversial case pits free speech against equal rights and could set a precedent for our nation’s values and how any similar case will be handled in the future. The court has the ability to decide the extent of the rights of private businesses and protection of civil liberties (specifically under the first amendment).

“[The ruling of the case] will set a giant precedent, whichever side they choose,” K. Cunningham said. “If they choose in favor of [the petitioner: Masterpiece Cakeshop,] that could set a precedent for discrimination in the future, and allowing people to sell and to refuse service to people based on their own religion. The precedent set by [the respondent: Colorado Civil Rights Commission] winning would also be very important, because it would limit free speech in some sense, but it would also allow a safer society for a lot of other people.”

Witnessing the case was a way for the Cunninghams to interact with the judicial system. The sisters had previously participated in a moot court case of Masterpiece Cakeshop V. Colorado Civil Rights Commission in their AP Comparative Government class. Through this activity they gained exposure to and interest in the workings of the real Supreme Court.

“I really wanted to go and see strides potentially being made in the court,” J. Cunningham said. “When we did the moot court, it was very frustrating for me on a lot of levels because I wanted to really dive in and we didn’t have that much time, so I wanted to see it really happen.”

Observing the rea hearing offered a once-in-a-lifetime opportunity to learn more about the judicial system and its processes on Capitol Hill. The girls decided to attend the hearing on a whim and, despite their early arrival, were placed on a temporary (3 minute) visit. Fortunately, two permanent spots (open to only the the first 100 Supreme Court visitors) opened to the Cunningham sisters. Due to the influential nature of the case, many protesters from both sides were present outside the court as well as T.V. reporters.

Inside, they were able to hear discourse between the nine Justices—elite judges who have the final say in our county’s high-profile cases. Lawyers for each side debated the legality of the claims using evidence from past events, hypotheticals, and the Constitution, the supreme law of the land. The general atmosphere of the room was causative to causal and intellectual deliberation.

“In a very sort of informal, conversational manner…[the justices] were tearing apart [the other side],” J. Cunningham said.

Along with the legal teams, the Cunningham sisters had a chance to see the Colorado couple in the center of the case twice that day, upon entering and leaving the courtroom. Craig and Mullins appeared nervous, yet grateful on ruling day.

“They seemed like they appreciated [the day],” K. Cunningham said.

Her sister shared the same sentiment, sympathizing with the respondent.

“I bet they’re glad that this is over because that seemed like a very stressful environment,” she said. “They’re just like regular dudes [with] all these cameras around.”

After the hearing, the girls ate lunch and explored more of the the Supreme Court building. Chicken nuggets and pumpkin lattes were just some of the options provided in the building’s very own cafeteria. The girls took in paintings of former Justices and a statue of John Marshall, the longest serving Chief Justice of the U.S. Supreme Court.

Overall, the experience inspired the West Potomac sisters; interacting with the judicial branch was a new experience.

“I don’t know if I want to go into law, but definitely that arena,” J. Cunningham said. “Seeing it at such a high level, the highest level in our land basically, really made me feel like it’s possible to make a difference as a lawyer. The language was so informal but they had clearly done their research. Especially in these troubling times, I love seeing intelligent, educated people who did their research on a subject battling it out with facts. I love the judicial branch.”

The verdict of this historic case will be announced later this year.