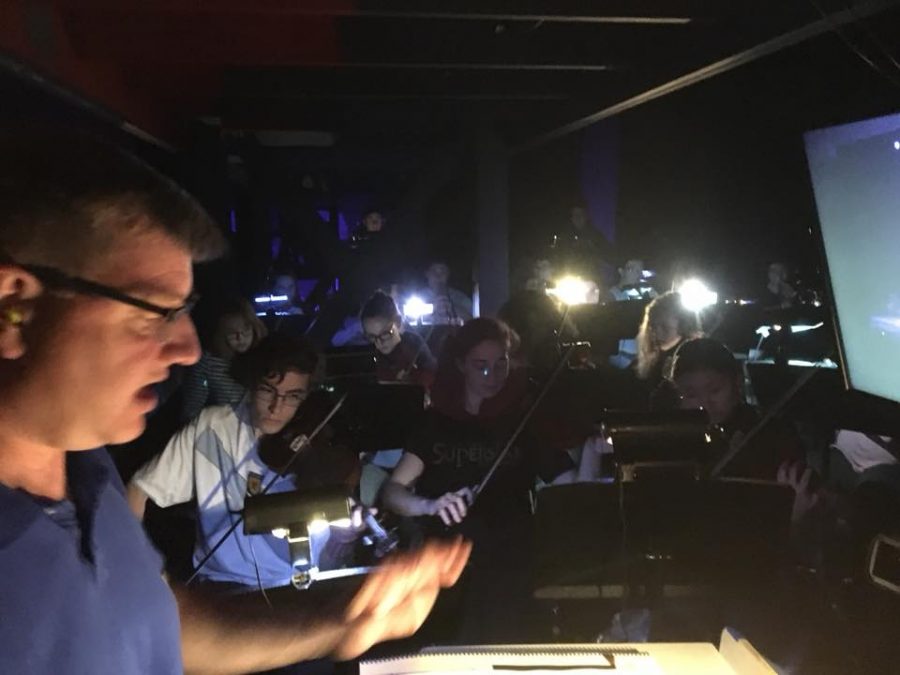 Seniors Halen Anderson (trombone) and Eric Wiley (trumpet) play in the pit. They learned which show they were doing in November.

“We didn’t really know what the show was,” Wiley said. “I thought we were doing Sister Act until we couldn’t find enough people, so we had to switch the show.”

Jesus Christ Superstar is a rock opera written in 1970 and adapted to film in 1973.

“I watched the movie and it was amazing,” Anderson said.

Last night was Wiley’s first-ever performance. He was influenced by his trumpet-playing friends to try being in the pit orchestra this year.

“Last year, Cooper joined, and Henry had already been in it,” he said. “I remember listening to them and it sounded like a lot of fun, so I decided to try it this year, and it turned out to be just that.”

Anderson is a pit orchestra veteran.

“I’ve been doing the pit orchestra for three previous years and I know that the company is a blast all the time,” he said. “We’re kind of a family, so it’s always really fun to put this huge production together.”

Wiley was pleasantly surprised by the ease of participating in the show.

“I honestly thought it would be a lot more time,” he said. “I knew the theatre kids would stay there a lot longer than we would, but in hindsight, it didn’t seem that hard to manage school and pit.”

How do these seniors not let their general lack of motivation interfere with the show?

“It was something that we enjoyed doing, so it wasn’t like a chore, like how it feels with our other classes,” he said. “Like Halen said, we’re a family. It’s nice to get to see your friends at the end of the day.”

These musicians appreciate their roles off the stage.

“My experience is different from the actors’ because we don’t have to act–we would be very bad at acting–and we can just pour everything we have into the music,” he said. “I think that’s what’s special about the pit orchestra: we get to just jam out and have fun while the actors are doing the dramatic stuff.”

Wiley respects the bravery of actors.

“I have a lot less pressure on myself because I know that I’ll be part of a group,” he said. “When I hear those actors or those singers, I just think, ‘Wow, that takes some guts to sing your heart out in front of people and not care.’”

Mr. Clark, the theatre director, and Mr. Rice, the band director, have to work together to make the show function.

“They’re great. They mainly just crack jokes at us,” Anderson said. “I couldn’t think of two other people better to work together on this.”

Anderson appreciates the traditions of these musicals.

Before every show the entire cast (the orchestra, the tech crew, the actors) circle up,” he said. “One night, it’s freshmen who give us speeches about how they’re feeling, and then it’s sophomores the next night, then juniors, and then seniors. [The seniors] all sit down in the middle and give these long speeches and it’s all emotional. That’s probably the best, when the seniors give their speeches.”

Anderson hasn’t given his speech yet, but he has an idea of what he’ll say.

“How amazed I am that everyone is so together on this,” he said.