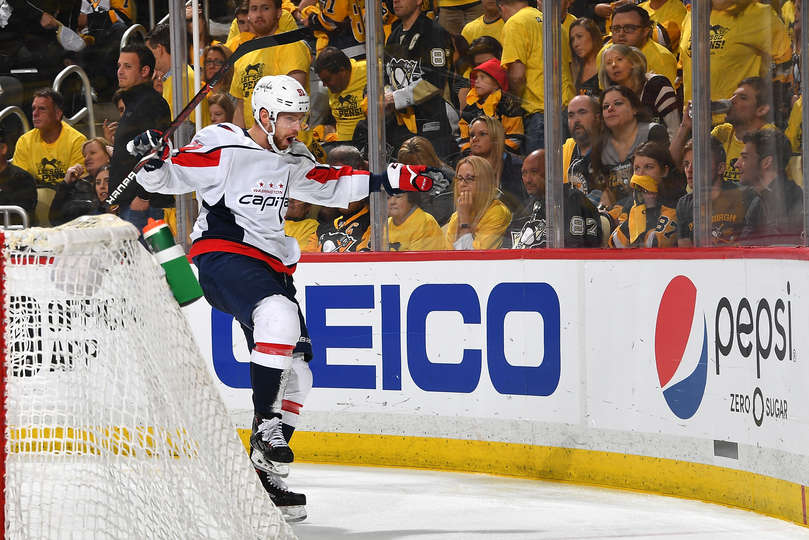 The curse has been broken for Washington, D.C. sports fans! This is the first time that the Washington Capitals have advanced to their conference championship round in twenty years. On Monday night, the Capitals defeated the Pittsburgh Penguins 2-1, winning the series 4-2, after game 6 went into overtime and a goal by Evgeny Kuznetsov clinched the victory. This ends Alex Ovechkin’s  streak of 109 playoff games without advancing beyond the eastern conference semifinals.

Freshman Jesus Munayco gave a special shoutout to Ovechkin: “Proud of Ovechkin’s hustle and hard work out their on the ice, happy for all of our boys, and let’s see what happens next.”

The game was a rollercoaster, keeping fans watching at home at the edge of their seats.

“It was a really stressful game,” Freshman Aidan Lansburgh said. “My heart was pumping for most of the game and overtime was pretty stressful.”

But when the game came to an end, reactions could not be contained.

“I broke my friends TV  because I was so happy that [the Capitals] won,” freshman Rudy Gillespie said.

“We were crying tears of joy and letting out high pitched screams and being the most excited we’ve ever been in our lives,” Wood said about their immediate reaction to the win.

“Following a Washington sports team is a blessing and a curse because you know they will be great during the regular season, but you also that when playoffs come around, it’s just going to be upset city, so seeing them defeat the Penguins and get past the second round for the first time in 20 years was unimaginable,” Wood continued.

Freshman Liam Malloy has been a fan since the very beginning, but the year usually ends in disappointment.

“I was nervous throughout the entire game, as every year I watch the Capitals go up on the Penguins or Rangers and choke it all away,” he said. “But as soon as the final horn sounded and Kuznetsov went 5 hole and won us the game, I was filled with relief and excitement to see them win.”

This is the first time West Potomac students have seen the Capitals make it this far, making it a historic Monday night for all hockey watchers.

“I’ve never seen any DC team go this far in the playoffs, so it is kind of crazy,” Lansburgh said. “I was just happy that they won!”

Sophomore Michael Devlin and his family welcome the win, but it is not the end yet, as Washington has just clenched the win in the second out of four rounds.

“It’s very exciting, but my whole family continues to feel really stressed for the upcoming games,” he said.

Malloy is very enthusiastic for the future of Washington’s postseason.

“I know they have made it close and lost before, but I’m really looking forward to seeing the Caps beat the Lightning and go on the the Stanley Cup Finals and win,” he said. “I think all of the DMV, along with my household, would rejoice if there Capitals won the Stanley Cup in our lifetime.”

Fans are coming together to support the Capitals going on to the third round and seeking the Stanley Cup. Tampa Bay Lightning is next for the Capitals, so the fight isn’t over. But by defeating the reigning Stanley Cup champions, a Capitals win is looking possible, and the curse is broken.