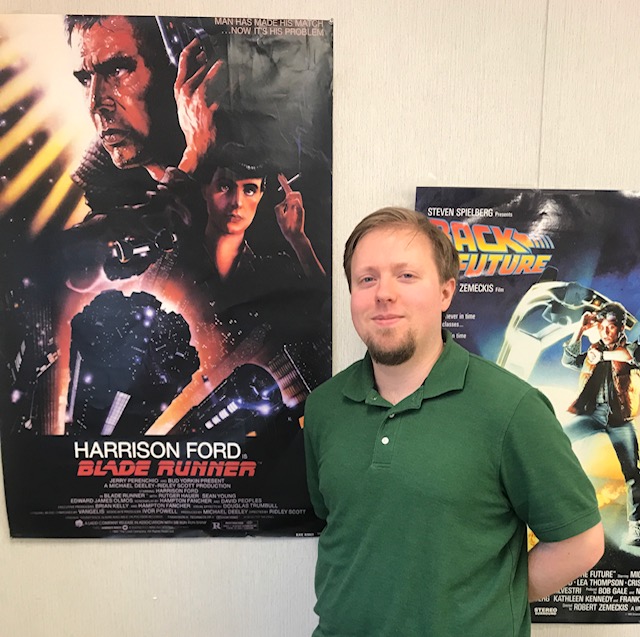 Mr. Reves pictured next to some of his many movie posters around his classroom.

Zachary Reves is in his eighth year here at West Potomac, teaching 10th grade English and the elective film studies. He labels himself as an “Army brat” because his father was in the military, so he has lived all around the world from El Paso, Texas, to Germany, and even South Korea, all before high school. “I don’t really have a place where I say I have roots and I’m from, I’m more just a child of the world,” he explains. Although he has lived all over the world, he remains a Chicago sports fan.

He attended Middle Tennessee State University (MTSU) for his undergraduate, then received his Master’s degree at George Mason, but not originally with teaching in mind for his career.

“I went there [MTSU] originally with the aspirations of being a musician, they gave me a very large scholarship music-wise, because Middle Tennessee was very close to Nashville, so recording music and everything was big there. I didn’t like it [music] in college as much as I thought I would, so I eventually changed my mind while I was there. I changed my major, like most people do, and I became a journalism major, ” said Reves.

Graduating during the economic recession in 2009 meant that newspapers were not hiring people, which was a problem for Reves, as a newly out of college journalism major. He explains, “I got ten job offers out of college. Each and every one of them was pro bono, which means for free. And to a kid with student loans and things like that I just couldn’t do it, so I called an audible and became a teacher. ” Mr. Reves then got his Masters degree in English education, and has been teaching for going on eight years, but that still wasn’t his original goal in life.

“You always ask kids what they want to be when they grow up and some kids say, ballerina, firefighter that kinda stuff. I always said when I was a kid I wanted to be an author; I wanted to write. I’m still in the process of trying to write something; free time is not as much as it should be,” he explained.

Reves came around to teaching saying, “I realized, ‘Well if in journalism I can’t share my love of language with people through writing in a newspaper, maybe I can do it with teaching’, so that’s how I became a teacher. To be honest, I am very glad I made the decision. I have done nothing to go back to journalism because my new love in life is education and teaching people, mainly because I get to have an effect. At the end of the day when I go to bed at night, I feel like what I did today made the world a better place.” He concludes.

In English, Mr. Reves’ favorite unit to teach is media literacy, which he summarizes as “being able to understand how information comes your way and how to read the news.” He explains, “It’s so topical with what is going on in politics and all of that, and it is something that students need to be aware of, that there are malicious people out there trying to manipulate them and they have to be able to make important decisions with an educational background, not just using gut reaction.Whether that’s spending money or casting a vote, but being able to interpret whatever news comes their way so that they can choose to make the world a better place in the appropriate way is why I like teaching.”

His spark for Film Studies began in high school while looking in his college course catalog. “My parents watched films, so I did what my parents loved. I watched films as well, and I came to appreciate the classics from an early age, and so when I got to undergrad college, journalism required a double major, so I was looking around through the catalog and I randomly found a film studies section and I went, ‘Are you serious? That’s a thing?’ So the very first class I took was for film studies it was a 6-9 P.M. class on horror films.”

“There’s a film out there for everyone. It’s a neat way to look at human nature and what they enjoy and how that’s expressed to us. That’s what film studies is all about; it’s about being able to express stuff about ourselves, but not through writing, through a visual, and through sound, so it’s a different form of expression. What I love about it is that the community can experience it together,” he describes, expressing his love for films.

Mr. Reves loves the end of his students’ journeys as well, saying, “I love going to graduation, seeing kids walk across the stage and going, ‘I helped them get there’ and that helps me sleep at night I guess, and that’s why I like doing it  [teaching].”