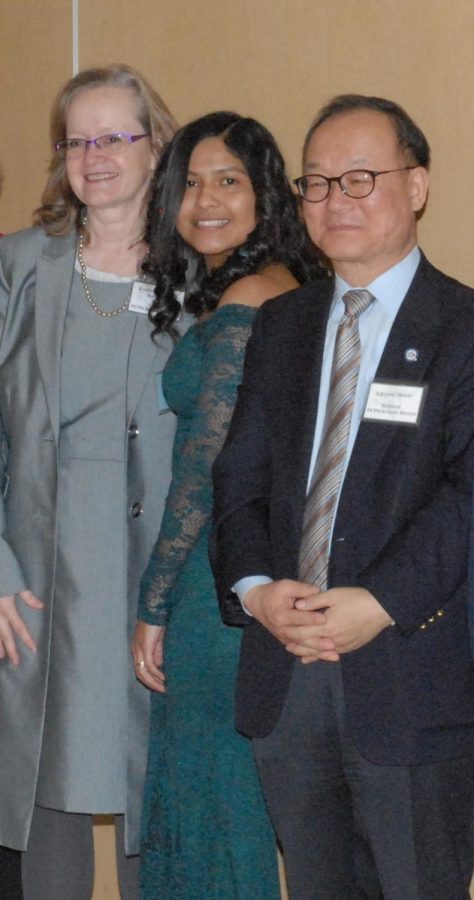 West Potomac Senior Diana Argueta was selected to receive the 2019 Student Peace Award presented by Fairfax County. This is the 16th annual presentation of the award originally founded by Margaret Fisher and Margaret Rogers.

The award began with just one high school in the county, Herndon. However, over the years the award has spread across 22 FCPS high schools, and King Abdullah Academy in Herndon. This award recognizes those who have encouraged peace, unity, and removal of violence.

West Potomac’s representative, Mr. Robert Rigby, nominated Diana, who is the founder of the Hispanic Leadership Club. According to Rigby, Argueta, an immigrant from El Salvador, came to the U.S. as a freshman in high school. As her journey through high school continued, she learned English and founded the Hispanic Leadership Club, of which she now serves as president.

Argueta says, “I had to get used to the food, weather, and missing family back home. It was hard making new friends and expressing myself.” However, this didn’t stop her from promoting peace in her community. Argueta has done things such as help host folklore dances on Mothers’ Day for the last two years with more than 50 mothers each year. She and the HLC also had some car washes to fundraise for future events. In addition to that, Argueta said that in the summer of 2017, she and the other members of the HLC went to a shelter and painted  an entire house in Old Town Alexandria.

Argueta enjoys meeting and helping many people which she does through the club. She also appreciates “the initiative to become a leader to other students so that they could do something similar in the future.” Katherine Lodge, HLC sponsor, said Argueta is a person who constantly encourages members to listen to opposing points of view to find a middle ground.