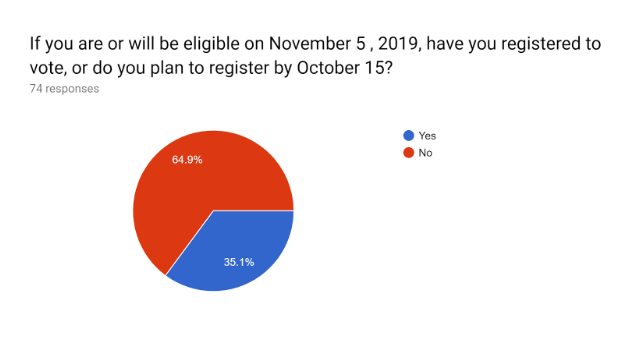 Here is a poll taken of some of the Senior Government classes.

Many seniors at West Potomac, those who turn 18 on or before November 5th, have a chance to vote in their first election. Voting this year is November 5th. The seniors of West Potomac will be voting on the Senate and House of Delegates. This year, the Democrats want to take back what they lost from Trump in the 2016 election.

In a survey West Po conducted a survey of our seniors through government classes, thirty-five percent of seniors will turn 18 on or before November 5th. Voting takes place in various schools depending on where you live.

https://vote.elections.virginia.gov/VoterInformation, you can check this website to see where you will be voting in this year’s election.

The very first thing is that you have to be a citizen of the United States. You also have to be 18 on or before November 5th. If you turn 18 the day after, you have to wait till next year to vote. But that doesn’t mean you can’t help your community. Canvassing is one of the most effective ways to get people to vote. You write a script and go door to door trying to convince people to vote. You have to have no criminal charges and be a citizen in good standing. You also can’t be in prison or on parole. If you are, you can not vote. You have to be a local resident to be able to vote. For example, If a student were to  move, she or he can absolutely still vote, but you should go to your local election office and update your voter registration.

This community is split into 8 different districts. There are 18 democrats running and 4 republicans. Currently, Eight of the 18 Democrats have dropped out. One of the Democrats that is running is Bernie Sanders. He’s 76 years old and has already run twice for President. According to the Washington Post, “the Democrats will most likely win. Democrats already have most of the seats in the Senate, and they will most likely keep them. “This could be the smallest political voting map they’ve seen in years.”