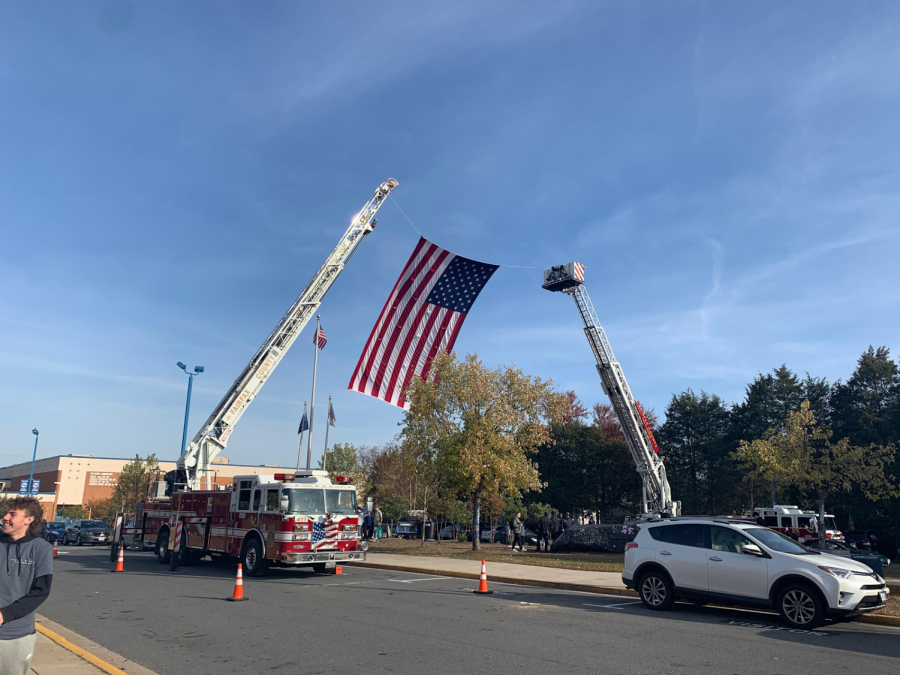 The students took part in many different activities, like picking up trash, painting the rock and the tables outside the cafeteria, replacing the wood barriers around the mulch beds in front of the cafeteria, raking leaves, and trimming the trees around campus.

The day began with a speech by Jim O’Farrell, who runs the local Travis Manion chapter, then the students participated in a 22 push-up challenge, one for every veteran who commits suicide daily. He also led a call and response, he would yell, “If not me,” and the students would respond, “Then who?”

Then, the winner of the Veterans Day Poetry Contest, 11th grader Janna Helvey∗, read her poem out loud. The West Po band and Chorus also performed patriotic songs like We Honor You which the chorus sang to close the opening ceremony, to pay respect to veterans. Afterward, students split into groups and began working on their projects.

“Travis Manion Day is important because it encourages students to honor veterans and do good in their community,” said Emily Grantham, 11th grade.

According to Assistant Principal Jessica Statz, who was responsible for putting together the first Travis Manion Day four years ago, they wanted to make it a great day for students, vets, and first responders and everyone involved.

As stated earlier, O’Farrell runs the local chapter of the Travis Manion Foundation, which is an organization for veterans that was created to honor the legacy of Travis Manion, a soldier from Pennsylvania, who was killed in Iraq in 2007. The words, “If Not Me Then Who?” which were painted on the rock outside the cafeteria, came from him.

The day ended with a gathering on the West Po Stadium Field where O’Farrell ran through the day and the guitar club led a sing-along with This Land is My Land before the students were dismissed for the day.

Every year I visit him

Every year I watch as he grows older

But he is reminded; he can never forget

Constantly reminded of those purple hearts that line his office walls

Of those doctors appointments that are never-ending

Of the people he once knew but has now lost

Keeping those that he loves close

But no matter his flaws

He tells me sometimes

How he would love for me to be a nurse

An angel he says, an angel

It motivates me, those words he says

Motivates me to do better in school

In giving back to my community

He inspires me to get better

Nothing can stop him I thought after his first fall

Because he is my hero