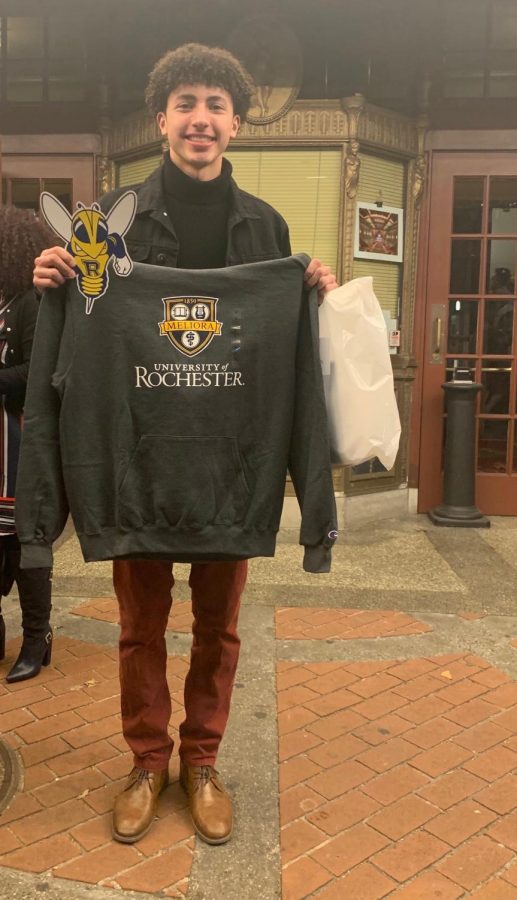 West Potomac’s very own Oswald Garcia, senior, became the only recipient of the Posse Scholarship reward in Fairfax County this year. Through the award, Oswald has received a four year, full-tuition scholarship to the University of Rochester, where he’ll major in electrical and computer engineering. Garcia is the second West Potomac student that West Po’s college and career counselor Mrs. Carter, has witnessed receiving this award, and the first since 2016. He was the only award recipient in Fairfax County this year.

The Posse scholarship is a full-tuition scholarship that is rooted in the belief that “a small, diverse group of talented students—a Posse—carefully selected and trained, can serve as a catalyst for individual and community development,” according to their official website. To be eligible for the scholarship, a student must be nominated by their high school or a community-based organization, be in the first term of their senior year in high school, demonstrate leadership within their high school, community or family, and demonstrate academic potential, and Garcia checked all of these boxes.

“Oswald has a real curiosity and love of learning,” Mrs. Kerry Cooper, Oswald’s English 11H teacher (Disclosure: and journalism adviser to The WP Wire) said. “He had great questions and engagement in his English class, but he showed that love of learning when I asked him why he was taking piano as an elective. ‘Why not? They offer it here. When else will I learn it?” she continued.

After being nominated by Mrs. Carter, as well as his school counselor, Oswald was interested in pursuing the Posse Scholarship, saying he heard good things about the program itself, as well as it being a full-tuition scholarship. He also applied to scholarships to other schools, such as James Madison University, George Mason, Virginia Tech, and Old Dominion University.

“I felt I could be a good candidate based on my creativity, leadership, friendliness, determination, and open-mindedness,” said Garcia.

When describing the application itself, Garcia says that the process included meetings, ranging from group meetings with around 200 kids, coming together to workshop and complete group activities, a one-on-one interview, and finally an interview with a representative of the school that was chosen. Oswald chose the University of Rochester, in particular, to attend due to its high ranking as an engineering school. The University of Rochester is also a Divison 3 school in terms of athletics, which was relevant to Oswald as he was interested in and is still considering playing as a walk-on for soccer.

He said his main goals are to “be open to the world and to make a difference.”

Looking back on the entire journey, he says the experience he has gotten from the meetings, as well as the different opportunities and connections he has gained through the process, along with the reward of receiving the scholarship itself, is one of the best and most valuable parts of this process.

He attended the drive-through graduation last week and he said, “My mind is at the University of Rochester, my heart is with West Po.”

For next year’s Posse scholarship opportunity:

In summary, POSSE is:

Current juniors must submit the attached self-nomination form and questionnaire to Mrs. Carter [email protected] by FRIDAY, JUNE 26th! This is an exciting and great scholarship opportunity for students, please read everything carefully and thoroughly. This is not your typical scholarship – it’s much more!!

Review the POSSE website at https://www.possefoundation.org/: learn about the POSSE Foundation
Research the participating schools: Bucknell, Lafayette, Sewanee, University of Rochester, and University of Wisconsin-Madison
Complete the attached self-nomination form and questionnaire if you think this might be for you!
You MUST email the attached self-nomination form to Mrs. Carter [email protected] no later than FRIDAY, June 26th, at 3 pm!