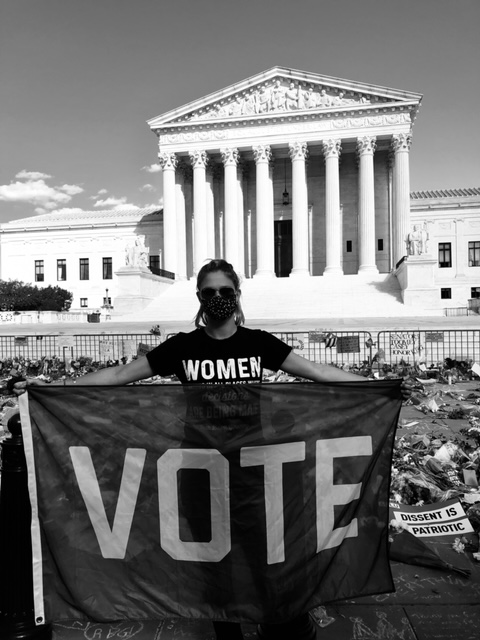 Photo credit to Juliette Fore. Fore is pictured at the front of the Supreme Court.

After the passing of Supreme Court Associate Justice Ruth Bader Ginsburg on the 18th, thousands visited the Supreme Court in D.C. to honor her, including West Potomac students.

She Lay in Repose at the Supreme Court for the last time on Wednesday, September 23rd, and Thursday, September 24th. Hundreds of people waited in line for hours to be able to reach the steps to see her and pay their final respects. Seniors Courtney Smith and Katie Jo Moery visited the Supreme Court on Wednesday. “We knew it was a moment in history that we wanted to take advantage of and experience since we were able to,” Moery explains on why they decided to go.

Every night after her passing, people went to the Supreme Court with candles, posters, flowers, and any other mementos to lay on the steps in memory for her. Junior Juliette Fore went before the Lying in Repose on Sunday.  “The atmosphere was full of gratitude for all she has done for women. There were children drawing pictures with chalk, and elderly women crying. You felt you were present in something significant,” Fore said.

It was a somber, quiet atmosphere at the Supreme Court, as people quietly mourned her loss. “Once we got up to view the casket people were quiet and the mood was pretty heavy,” Moery explains.

Many people visited her at the Supreme Court, including President Clinton and his wife Hillary, who nominated her for the seat in 1993. Others included U.S. Senators, Vice President Pence and his wife, and Bernie Sanders.

Smith concluded, “It was amazing to see how many people were there to pay their respects on how much she has done for the country and women in general.”

Ruth Bader Ginsburg Laid in State at the Capitol on Friday, September 25th. She was the first woman and Jewish person to ever do so. This event was not open to the public due to the covid-19 threat.

One last final accomplishment of many, as people thank and remember a woman who helped change the world.