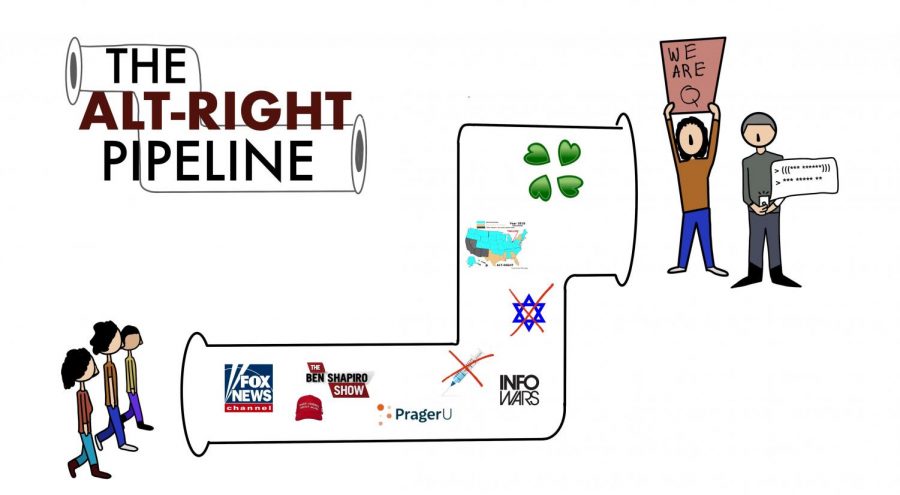 Why are some young people falling victim to the fear-mongering and conspiracies of the Alt-Right? The tunnels of algorithms and steps towards far-right radicalization is a phenomenon of online political spaces known as the Alt-Right pipeline. The Alt-Right is an extremist political ideology that centers on White nationalism and far-right policies.The Online Alt-Right pipeline is a set of baby steps towards the indoctrination of far-right ideology to people exploring YouTube and other online spaces, particularly young boys interested in gaming videos. What might start as an innocent gaming video may bring a recommendation for the next video being a right-wing commentary channel. These channels typically boast videos that have more extreme implications, and introduce ideas that can lead people down the road of more dangerous ideologies including white supremacy. Many videos are framed as comedy, and can often lead to the demonization of women and the denial of misogyny. At the same time, the videos often warp the context, painting social justice movements as irrelevant reactionaries.

Typically the commentary becomes more intense throughout the videos and throughout the types of channels recommended. Typical conservative talk show hosts and even Alex Jones, a peddler of conspiracies, can be recommended and often the victims of these people will agree. This content can lead to conspiracy theories, and other far-right ideologies. Often these will be outright racist, or have a subtext of anti-semitism and other kinds of hate.

Channels like PragerU and Lauren Southern, political education channels on YouTube, seek to create a faux sense of education and legitimacy that they play up in order to make themselves seem more factual, when in reality there are rarely any sources or factual or backed-up information provided. Typically these channels will be viewed and subscribed to the most around points of political contingency, especially during election seasons. According to Google Trends, searches for topics Ben Shapiro, Steven Crowder, Lauren Southern, and QAnon all began to rise around the same time, beginning in around 2016/2017 with similar spikes in searches, showing a connection and direct tunnel from this content to more outrageous conspiracies. These videos have been gaining traction in recent years and their ideology has gotten more and more traction, especially Qanon. According to “Q,” March 4 was the day QAnon believers believed that Trump would be reinstated into office and the truth of the cannibalistic child traffickers plotting against American values would be exposed. Of course, no such thing happened, though the Capitol was placed under heightened alert to ensure a repeat of the assault of January 6 did not occur. Nothing materialized.

With the pretext of these types of videos, often the people viewing them will seek out this type of content and find it on other platforms such as Twitter and 4Chan, where content is generally less moderated and text posts riddled with racism and misogyny can run free.

The online journeys of retired radicals are documented all over, even being shown by major news outlets. They describe how they were brought into this type of thinking through intellectually dishonest thinkers. The digital age has many upsides for the spreading of education and info, but can also support narratives fueled by fake news and propaganda. The best way to prevent this kind of indoctrination is simple.

From a young age, it is important to teach children to be anti-racist and anti-hate. But that’s easier said than done.