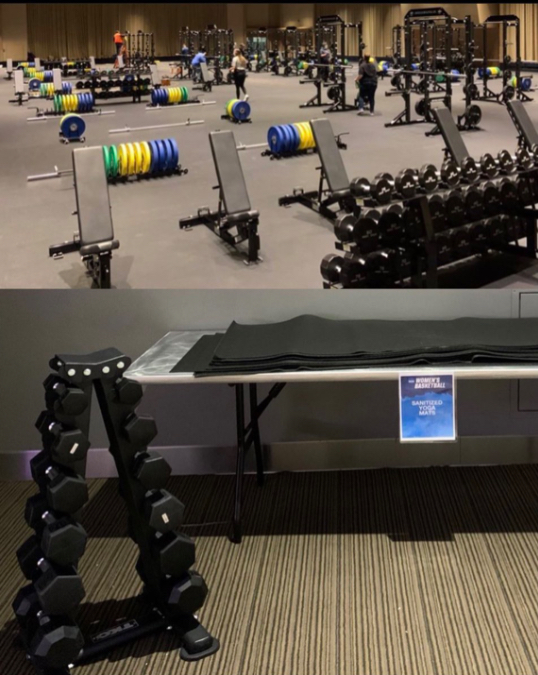 When Stanford’s Sports Performance Coach Ali Kershner posted a photo of the on-campus weight room facilities at the NCAA Women’s Tournament Bubble in San Antonio, comparisons to the men’s bubble in Indianapolis were upsetting. Pictured above, the women’s weight room consisted of just some yoga mats and a couple light dumb-bells. Meanwhile, the facility in Indianapolis contains plenty more weight training options for the student-athletes competing in this year’s men’s NCAA Tournament.

WNBA star Sabrina Ionescu, last season’s National Player of the Year in NCAA Women’s Basketball, commented on twitter about the inequitable differences between the two weight rooms, “Women’s @NCAA bubble weight room vs Men’s weight room… thought this was a joke. WTF is this?!? To all the women playing in the @marchmadness tournament, keep grinding!” she wrote.

Along with Sabrina,  Las Vegas Aces Forward and former WNBA Rookie of the Year A’ja Wilson also offered her thoughts on the matter, tweeting “The NCAA bubble weight room is beyond disrespectful.”

Amidst the scrutiny, NCAA Vice President Lynn Holzman released a statement yesterday acknowledging the disparities, saying “We acknowledge that some of the amenities teams would typically have access to have not been as available inside the controlled environment. In part, this is due to the limited space and the original plan was to expand the workout area once additional space was available later in the tournament. However, we want to be responsive to the needs of our participating teams, and we are actively working to enhance existing resources at practice courts, including additional weight training equipment.”

West Potomac Senior Danea Mackey, who was the Occoquan Region Player of the Year this season in girl’s basketball, shared her thoughts on the matter. “Honestly, it’s very offensive seeing the difference between the treatment that the male and female players are receiving from the NCAA. Seeing the difference between the men’s and women’s weight rooms automatically shows the discriminatory mindset the NCAA has towards women,” she said.

The NCAA Women’s Tournament will tip off Sunday at noon when the 5th seeded Iowa Hawkeyes take on the 12th seeded Central Michigan Chippewas on ESPN. If you are a West Potomac student or teacher, you can enter the WP Wire’s Women’s NCAA Tournament Bracket Challenge by using this link, following the written instructions, and entering the password “WP Wire” (case sensitive).