Finding the Balance Between Athletics and Academics 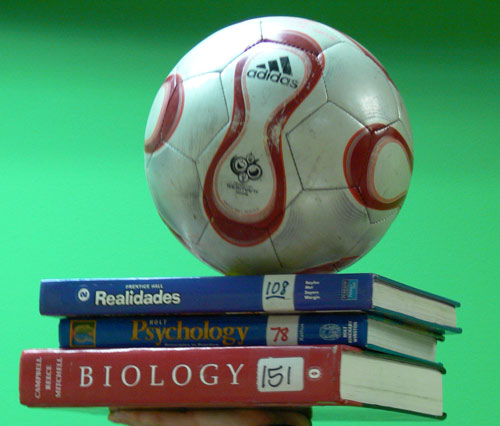 Aaron Locks of the National Academy of Athletics writes that, “One of the most challenging aspects of sports is commitment. Anyone who has played sports knows there have been times when you’ve just wanted to walk right off of the court or the field and never look back.”

Many student athletes can attest to the fact that juggling school and athletics can be difficult, especially with the time commitment required to truly excel. It’s evident that success requires dedication and commitment, but how much time does one really need to put in to be the best at what they do?

All eyes were on West Potomac graduate Ashley Wagner at the 2014 Winter Olympics in Sochi, Russia. She came out with a bronze as a part of the U.S. women’s figure skating team. Wagner began skating at the age of five, training rigorously while attending school, and is today ranked No. 1 for women’s figure skating and No. 2 in the world by IceNetwork.com.

Another West Potomac skater is senior Masha Dubograeva. Prompted by her ice hockey playing brother and father, Dubograeva first strapped on a pair of skates at the age of four. Recalling her first day, she commented, “I was afraid they were going to make me do a triple axle, so that first day was nerve-racking! But from then on I’ve loved the sport.”

In describing ice skating and the incredible time commitment that goes along with it, Dubograeva said that, “Before tenth grade I skated everyday but then it was SATs and you have to keep your grades up, so I skated a lot less than usual. Many girls are home schooled so it’s definitely hard to be in school and do it [ice skating]” She added, however, “[Wagner] is number one in America and she went to West Potomac, so that says something.”

Ice skating is an incredibly competitive sport, she adding that “you still have friends…at the same time, they’re your competition.” Regardless, Dubograeva has won numerous regional and even national competitions. Dubograeva hopes to continue skating in college, providing wherever she goes has a rink, and would love to pursue a career in skating such as coaching.

Between those who are fiercely dedicated and those who simply are not, senior Daniel Walder falls somewhere in the middle of the spectrum. He has played basketball since the age of five and explained, “I enjoy the competitiveness and I have fun at the same time.”

He originally began playing in a rec league because his father wanted him to join a sport, then joined a travel team at the age of 13. Today, Walder plays basketball twice a week in between school, college applications, and rowing, as a way to get exercise and spend time doing the sport he loves.

Walder believes that the amount of time an athlete has dedicated to their sport decides how successful they will be, because if one person were to slack off in their own dedication and competitiveness, another would be waiting and practicing in order win or move up in the ranks.

Junior Nick Vance similarly believes that not being dedicated to one’s sport acts as a disadvantage. “People who are more dedicated try harder and get better quicker.” While Vance is more dedicated to tennis, he participated in and enjoyed track for part of his sophomore year.

Vance joined track as a way to keep in shape during off-season as well as to distract himself from the stresses of school. He never approached track with the same commitment and dedication as he does tennis. A little over halfway through the season, he was forced to quit the team. “Grades are more important and I didn’t have any time for track, so instead, I had to exercise when I actually had time.”

Although Vance was unable to finish the season, it was not a waste. He loved having the chance to race against other schools alongside his teammates and believes that competing, especially in relays, improved his teamwork.

Many athletes feel this way about their sport. Rather than a way to be the absolute best or get into college, it is an opportunity to be active and participate for fun. This is why athletes of every level of dedication can be found participating in West Potomac sports.