Hugh vs. the World: The DBQ Has Got to Go

Hugh takes on the DBQ, the theory behind it, the actual practice of it, and why it's not working 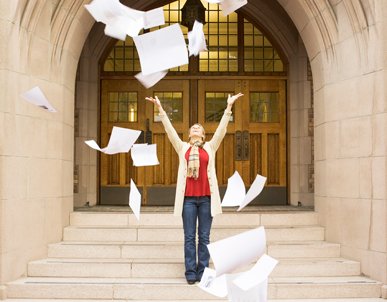 For on-level and advanced history classes alike, DBQs have become the norm in essay writing. They were first implemented in 1973, in lieu of the traditional free-response essay on AP US History exams. Administrators were unhappy with students’ half-hearted attempts on the traditional essay, and decided to add more structure and guidance, with the goal of improving scores.

Essentially, what they did is turn essay writing into a formula. Plug your thesis here, your transition word there, your details over there, then add some fluff…and you have an essay. To make things easier, they include documents to use in your essays. This way, you no longer have to actually know what you are writing about!

Just like algebraic formulas, if you make an error in the structure of the essay, you get penalized. It takes the creativity out of writing. Writers do not have the liberty to decide how they form their argument; that is dictated in the rubric. For this reason, writing a DBQ seems like writing someone else’s essay. And if you start reading a lot of DBQs, you will notice they all sound pretty similar.

The fact of the matter is, good, creative writing cannot be boiled down into an equation. Instructing students how to write DBQs will not teach good writing skills or critical thinking; it will do the opposite. It will teach kids DBQ writing, not actual, real-world writing.

The DBQ Project, an initiative founded to spread the DBQ across the country, believes that the DBQ is about much more than essay-writing. The project is guided by five core beliefs:

All students need to learn how to think.
Learning to think requires practice.
Thinking is hard work.
Thinking is clarified by writing.
Thinking is for everyone.

What the DBQ Project and many other education professionals argue is that the DBQ is really a device to help students learn how to think. Despite my fundamental disagreements with the idea of teaching others to think, one must ask the question: why is the DBQ better for critical thinking than free-response essays?

My answer: they are not.

Our questions are interesting.
Our background essays and documents are engaging and understandable.
Our units go beyond engagement and require analytic reasoning, and students like the challenge. There is nothing like success in an authentic, demanding task. As Thomas Paine said, “What  we obtain too cheap, we esteem too lightly.”
Our questions demand that students take and defend a position.

First, how can they claim that their questions are interesting? These are essays about a subject: history. If the DBQ was truly an effective learning measure, it would not really be about their prompt, it would be about the subject.

As someone who just wrote a long, dry, DBQ based on Buddhism in China, I can attest to the fact that the background essays and documents, are, in fact, the furthest thing from engaging. Moreover, I would argue that there is little less engaging than reading a 9th century Confucian scholar’s poorly translated opinion on Buddhism.

Also, how can anyone believe that a DBQ requires more analytic reasoning than a traditional essay? In preparation for a DBQ, one studies how to write a DBQ, whereas in preparation for a free-response essay, one studies the subject matter. Apparently, structuring and developing your own argument without a template, using only your prior knowledge of the subject requires less analytic prowess than skimming though pre-selected documents and writing an essay about one of two opinions allowed by the prompt, which leads me to my next point.

Their questions do demand that students take and defend a position. One of two positions, for or against, are the only options made possible by the prompt. For example. consider this real DBQ prompt from the 2008 AP US History Exam:
Analyze the ways in which the Vietnam War heightened social, political, and economic tensions in the United States.
So, what are our options? We have none here. The position we are forced to take and defend is already in front of us — you can’t argue that tensions were heightened. While most of us accept that as historical certainty, that doesn’t leave any room for critical thinking. All the writer has to do is formulate a thesis. If proponents of the DBQ really want to teach students how to think, why do they not just let them do so on their own, outside of the protective constraints of a DBQ format?

I propose the DBQ be eliminated from AP Exams. The goal of history class is to teach students history. Why then are we using an essay that requires little knowledge of the subject at hand as a major grade in the course? The DBQ is basically an English assignment, and a poor one at that.